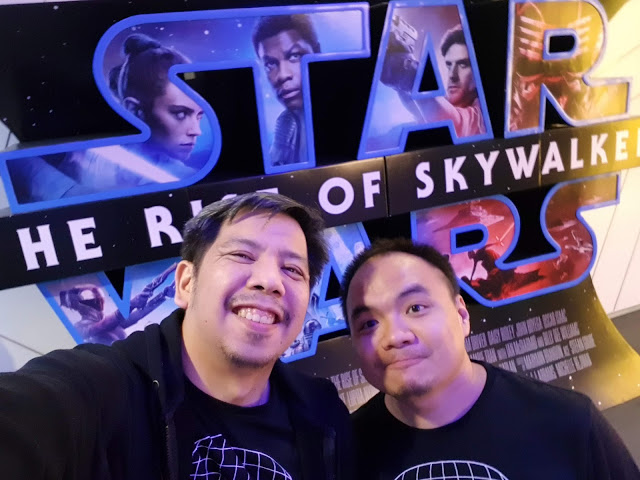 Tobie and I managed to catch one of the limited screenings of Star Wars: The Rise of Skywalker last night, while the rest of folks will have to wait for January after the MMFF to catch it as well. The quick summary is that we generally enjoyed it but felt it was just okay and nothing amazing. There were a lot of quirky narrative decisions and last-minute plot twists that will never get fully explained, which is par for the course for J.J. Abrams.

I'll try to avoid spoilers, but some of my references may feel like spoilers to some so consider yourself warned beyond this point. Tread carefully.

One of the best things about the old Expanded Universe, now the Legends stories, is how they managed to develop the story of the Skywalker family in such a diverse manner. We followed Luke as he set up his Jedi Academy and how he fell in love with Mara Jade, the Emperor's Hand who had sworn to kill him. We read about the misadventures of the Solo children as they came into their own Force abilities and met a number of new characters along the way including the various members of Rogue Squadron, Wraith Squadron, and all the different Jedi who followed after Luke.

But for the most part, the bulk of EU stories had to involve one or more of the core characters from the live-action movies. There was no escaping their shadow. The few books that did try to explore other aspects of the Star Wars Universe couldn't avoid having those characters get mentioned or somehow cameo in things. Everything centered around the Skywalker clan in one form or another.

The new movies tried to get us to appreciate a new core cast of characters in the form of Rey, Poe, Finn and even BB-8. The older characters were also there and had their roles to play, but for the most part, they still weren't the center of the story. The Last Jedi really tried to push this further by stressing that anyone potentially had the power to be greater than they are - that anyone could even be a powerful Jedi, strong in the Force.

Rise of Skywalker sort of backpedaled from that notion a bit as part of its effort to reinforce the core cast and then find a way to distance the story somewhat from the Skywalkers. A lot of the fore characters had died at this point across the trilogy and this movie was more a send-off to them with a  modest effort to celebrate the new characters. The method they employed in trying to do this was less than ideal and had us diving deeper into nostalgia before we could stand a chance of getting out. The tonal difference between the three movies is significantly felt by the time we get to this movie and there's a serious effort to get back onto the track of J.J. Abram's vision while overcompensating for the death of Carrie Fisher and thus the loss of Leia Organa.

This last movie juggled a bit more than it should have between the premise of the new (old) big bad and the new series of McGuffin quests that the crew had to go on. At least they brought the gang together for this movie - something that had not happened as much as it should have in the prior ones. But the way the elements came together didn 't quite elevate things into something spectacular and we were left with a just "okay" spectacle. It's fun in its own right and it has a lot of great moments but it's now exactly an amazingly well-crafted narrative. We come to the end of this new trilogy without achieving that sense of satisfaction that everyone achieved something significant or that it all makes sense. We don't walk away from this movie feeling like we appreciate the journey that we took with these characters like what happened in the first trilogy or with other movie franchises like The Lord of the Rings or Harry Potter. But at least there was a bit silly space battle at the end?

I will miss the Skywalkers and their supporting cast but I'm also glad that we're free of them. If this franchise is going to continue and new movies are going to be made, we need to fully shake off the burden of that family mantle and plot a genuinely new course.
inner ramblings moving pictures Star Wars