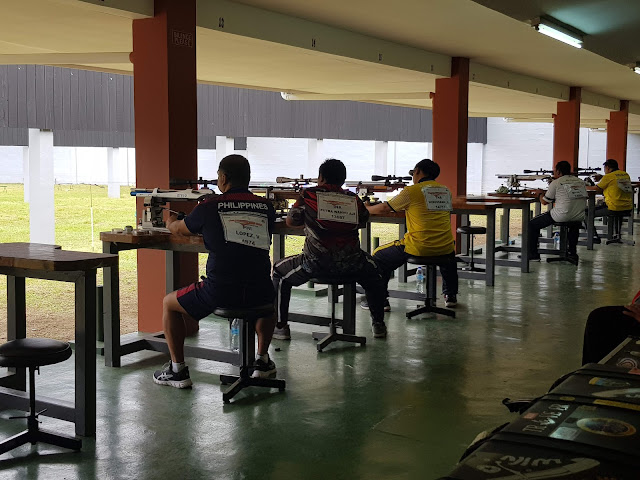 Dad is a man of many talents. Over the years he has explored a number of hobbies including painting, golf, and digital art and in every case, he's managed to get himself to an impressive level of proficiency. He has a knack for learning new skills and pouring himself into these ventures like a modern-day Renaissance man, especially when it comes to athletics given his school historty. My aptitude for computers is largely because of his influence and his exploration of the industry many years ago, as he applied the same level of discipline to learn all that he needed to know in order to get into the computer shop business.

Over a year ago, Dad got into shooting and was eager to try to get me to try it out as well. My brother turned out to be pretty good at it, but I wasn't sure if it was something I wanted to get into. Somehow things got serious enough that he managed to qualify to be a part of the Philippine time for shooting and started to travel for international competitions. Sure, Dad had won golf tournaments before and that was pretty cool, but reaching a level where he represents the country was a whole different ball game. It was mind-blowing to consider that he had already managed to surpass people who had been shooting for years.

Today I got to watch Dad compete in the Benchrest - Light Varmint shooting category for the 30th SEA Games. Admittedly, this was my first time to watch him compete so I had zero knowledge of how it all worked, but I learned quickly enough. Shooting isn't really a typical spectator sport since you can't tell whether or not people are hitting the targets unless you brought binoculars or a scope. And even then, the results aren't immediate - you have to wait for the judges to retrieve the target sheets and score them based on how well the shooters managed to hit the 25 targets.

It's a weird competitive environment since you can only really estimate how well you've done based on your own cursory evaluation of your shots through your rifle scope, assuming you had some time to review your shots within the scant 20 minutes you have per relay (round). So you go through three relays of shooting with only a general guess as to how things go but you never truly know until the judges complete their review process. so it's like one of those victory-point based board games we play where the winner is only really determined after scoring.

Long story short, Dad didn't win a medal this year. He had a good chance of doing so and that would have been amazing for him to do so at his very-first SEA Games, but the stormy wind conditions were pretty crazy and played a significant factor in leveling the playing field today. But I am tremendously proud of what he's accomplished by first qualifying to compete in the games at all and then finding the nerves to see things through. International competitions like this are always going to be intensely stressful, what more when you're not just competing as an individual but representing the country as a whole. It's not even a sport that gets as much popular support like basketball or the recent rise of male gymnastics but it's still a serious athletic endeavor all the same.

While the jury's still out on whether or not I could actually get into shooting myself since the notion of figuring out the impact of different things like the nature of the rifle, the wind conditions at the range under competitive pressure are all terribly stressful to even imagine. And that just makes what Dad managed to do today all the more awe-inspiring. This is the same man who delivers dad jokes on a whole new groan-worthy level and always knows how to make us laugh or smile when we need it.

So yes, my Dad's actually a national athlete and we're all tremendously proud of him. He's won a number of competitions and I'm sure he can only get better with more time and experience. And the family will continue to be there to support him and cheer him on until he gets his SEA Games gold medal and the many more to follow.
family stop the presses