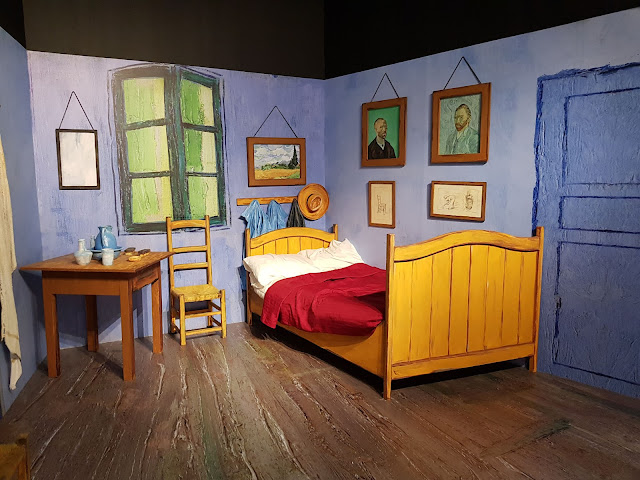 In 2011, Tobie and I got a chance to experience the Van Gogh Alive! exhibition while it was at the ArtScience Museum in Singapore. I knew that it was going to be a weird experience since it didn't involve the actual paintings but there was something almost magical about the unique audiovisual experience they had crafted. The wall-to-wall visuals really made you feel like you were somehow walking into Van Gogh's paintings, all timed to the roaring score of classical music.

So when it was announced that the exhibition was finally coming to Manila, I immediately considered booking tickets for me and Tobie to see it again. I figured that things would be a little different versus the Singapore edition. Once ticket sales began, there were a lot of complaints about difficulties with the system, which just goaded me off the fence in terms of deciding to finally confirm our slot.

Tonight was the big night and after a disappointing, rushed dinner at The Daily Cut, we queued for our chance to see the unique presentation again. And while I expected things to be different, I wasn't expecting it to be radically depressing.

Instead of a larger exhibition space that played the different "chapters" of the show on loop, we had a single cramped room where people mostly sat on the floor to experience the show. The sound system didn't seem to have enough power to permeate the whole room and it distinctly felt like the music was only coming from one corner of the space. The walls were barely over the height of the people, so gone was that magical feeling of being between the brush strokes of Van Gogh's work.

The work part of things was all the people. There were just so many of us in the space that we were all blocking each other's view of this or that screen. A good chunk of folks were just there to take as many selfies as possible and it didn't feel like they were watching the show at all. Instead, they were all just trying to take the same "art projected on my face" selfie pose as everyone else. And they weren't content with just one photo - some were taking selfies THE ENTIRE TIME.

People at least sort of sat down during the first cycle of the videos. But once they completed the loop, they all started to stand up and stop caring about other people still watching the screens and raced to and fro to snap selfies with the projections. Tobie and I left soon after that.

We went to the exhibition to recapture some of the magic we had experienced the first time around. But combining the terribly small venue and how the organizers allowed photography at all with today's selfie culture created a really horrible experience that wasn't about the art anymore. And that sort of broke my heart a little.
inner ramblings social networking Tobie