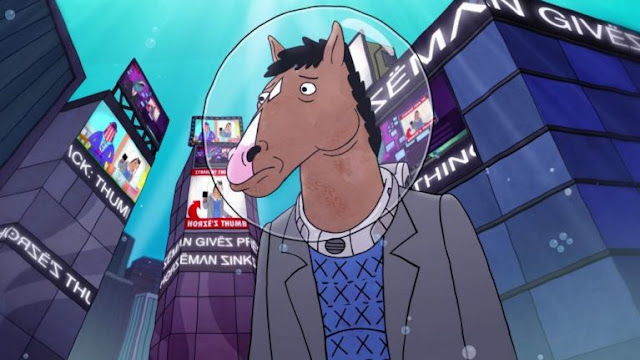 Today I had a rather spasmodic conversation with a friend throughout the day about BoJack Horseman since I noticed that he had been posting a lot of BoJack memes this week. As suspected, he's been watching the show on Netflix and I started geeking out over this very troubled, depressed anthropomorphic horse actor.

I never expected to get into the show. For me, it began as rather casual watching - one of those shows that I tagged as something I didn't want to waste Tobie's time with. The first season was pretty rough and BoJack is hardly likable but something happened mid-way through the second season and I started to get more invested in his story. The episodes like "Fish Out of Water" (S03E04), "Time's Arrow" (S04E11) and "Free Churro" (S05E06) come along, each being more overwhelmingly brilliant than the last one. I won't go into detail about why those episodes are amazing because you just have to see them to fully appreciate them. But they aren't perfect alone - they work better within the context of everything that has happened to BoJack until that point because this is some serious serialized storytelling.

It's a rather heavy show, emotionally, but it's an honest and thoughtful one as well. It's one of the most realistic (is that the best word?) depictions of a person going through depression or at least with one or another mental health issue and how they try to cope, albeit often poorly. And it's not just BoJack who needs help - he's surrounded by a lot of well-meaning but dysfunctional characters and sometimes they help one another out but a lot of times they just complicate things without meaning to. There's so much complexity to this show and it all comes together beautifully.

The show is finally wrapping up with this sixth season and I blitzed through the first half before realizing that they had cut the season in half and the rest of the episodes won't come out until next year. Still, the show is amazing and I'm quite excited to see how they'll wrap up his story for real.
social networking television