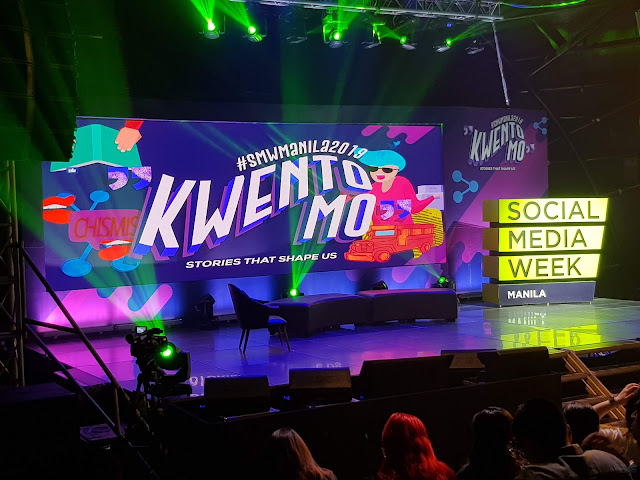 Today I got to attend Day 2 of Social Media Week Manila 2019 because a friend of ours was one of the speakers. Thus far I've mostly attended platform-specific events in Singapore like the last Facebook Summit for Asia, and this was my first time to attend a marketing event locally. I wasn't quite sure what to expect, but I was open and curious to see how things would go. The speaker list included some interesting companies and I wanted to hear what they had to say, even if I expected stuff to be more slanted towards the Philippine market.

On the whole, it was weird, and I guess ultimately an interesting experience. But I don't think I'd pay to attend Social Media Week anytime in the future - so huzzah for a free ticket for today. That's my TL;DR statement right there.

First, the event organization felt all over the place. Choosing the Samsung Hall at SM Aura wasn't the best choice since there's only one access point before regular mall hours - the basement elevators beside the supermarket. There was no provided access via the Office Tower so everyone had to cross the parking, get to the right elevator bank then wait in queue to be ferried up as they had only activated one elevator for the conference. And it was being manually operated to boot, I guess to prevent people from going to the mall floors.

I was worried that I'd be late but when we got up past the official state of 08:00am, the main doors were still closed and no reason had been provided as to why. Then they did start letting people in, it was just to give people access to the small lobby outside the auditorium, with the auditorium doors still being closed. No one could explain what the delay was - believe me, I asked the organizers on-site and only got a vague answer of "they were waiting for the go signal".

The opening remarks were at least 30 minutes late and the rest of the talks of the day just got progressively later and later. By lunch, we had somehow skipped one talk but we were still 30+ minutes late by the time we had a break for lunch. The lunch break was the only official pause between the sessions and there was no food provided. There wasn't even coffee provided, so I don't know what was going on there.

Second, the event didn't clearly understand its own target audience. The official site states: "If you're a brand manager, marketing professional, agency owner, entrepreneur or a consultant then Social Media Week Manila is for YOU." Companies had to pay PHP 5,000 PHP10,000 per person to attend this event. And we kicked things off with a life coach being all touchy-feely and forgetting to somehow link things to digital. Throw in a speaker slot that was reserved just so that someone could propose to his girlfriend despite things running late and I don't know what sort of ROI business folks could get out of this.

Not all talks were bad, but I feel like the storytelling theme for the year - Kwento Mo: The Stories That Shape Us - was not really felt or at least very loosely enforced. I think it's only true that all the speakers had stories to tell us but not necessarily insights on the use of storytelling in marketing. Google was present for two topics, but the first was a very basic look at SEO/SEM and the second was just celebrating popular YouTube Ads based on their internal awards program. If this was really supposed to be an event for leaders of the digital marketing space, shouldn't we get more provocative and insightful topics? Where was the data showing the results of their work? Where were the actionable insights and business-relevant learnings? How could entire panels forget to discuss how things connected to digital marketing or even just marketing?

Third, the format itself may not lend itself well to supporting actual learning. The event was largely scheduled to run from 09:00am - 06:00pm with only a one-hour lunch break. Each keynote talk was set to run for only 15-30 minutes and the "panels" were also 15-minute commercials with no avenue for Q&A. There were no separate tracks so everyone had to sit through everything in order to get to the talks that you might actually be interested in, but things were largely watered down in terms of content since there's only so much that you can fit into talks that short. And I'm sure people would have had genuinely interesting things to share had they been given clear parameters and more time to talk. The fact that more than half the items on the agenda on the website still declared topics as TBA just shows that a lot of it became very last minute.

Fourth, people largely talked about themselves, so it was a lot of blatant marketing. There wasn't even a decent effort to present things in a manner that connected to the theme first then circled back to the product at the end or something. GCash just talked about what GCash does and a little of their history. Salesforce talked about the power of Salesforce for social and went as far as bringing a client on-stage to do a weird live testimonial mini-interview that obviously went way over the allotted time. Bias aside, I honestly appreciate how our friend at least discussed his learnings as an entrepreneur and didn't feel the need to get everyone to sign up for his service as part of his talk.

Ultimately, it was certainly educational, but maybe not in the manner that the organizers intended it to be. I walk away from this feeling like the big players in social are dealing with the digital marketing industry locally with kid gloves on while the actual players in the industry are too caught up in their own work to really give back to the industry and help their peers grow. Sure, there's a lot I don't know about the folks here and I doubt this one event is a definite representation of the industry as a whole, but it's what I have to work with for now and I'm not all that keen with what I see so far.

I'll still consider exploring other local industry events and see how things go, but I definitely don't want to go back to this one next year even if I get a free ticket again. I'm still better off flying to Singapore and attending the events there.