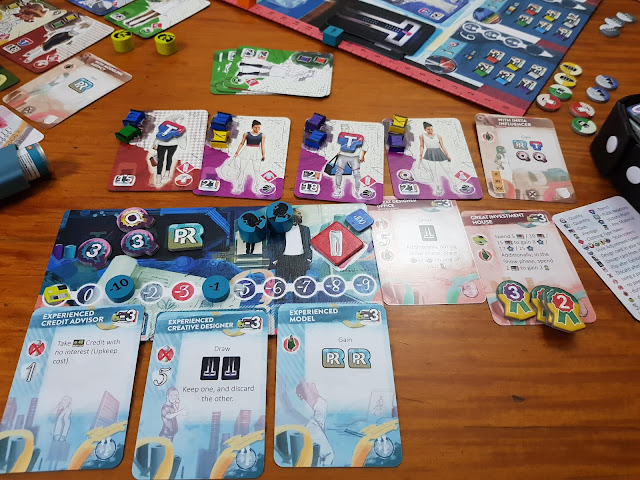 Trying something a little new this month by allocating a blog post to look back at the different tabletop games we've played this month using my BoardGameGeek logs and other notes. That means a mix of board games, card games, and of course full RPGs.

For RPGs, October was pretty good since we got to progress most of our active games - these being Pendragon, Wraith the Oblivion, and Vampire (5th edition). There were a lot of scheduling complications in recent months and it was nice to get all games rolling, especially the long-delayed Pendragon campaign. I'm currently the longest-surviving character but the time to retire is fast-approaching and I'll need to finalize on which character to play as next.

We added a good number of games to the collection and got to play them immediately, as based on my records. New games that have begun to get some action include Martians: A Story of Civilization, Deep Space D-6, Legendary: Revelations, Of Dreams & Shadows, Crazy Karts, and the local game Hugot. This month also included the first time we had played the Combatron: The Card Game to finally check it out.

The big celebration was getting our copy of the new edition of Prêt-à-Porter after a pretty successful Kickstarter campaign. It's a beautiful upgrade of an economic strategy game that we already love with a lot of enhancements all throughout. It's taking us a little time to get used to the rather busy visual style of the components but it's still a lot of fun.

This month also had us revisiting a number of games that have been languishing on the shelves for a while. This includes the different Fluxx games, mainly because of renewed interest triggered by getting copies of the different Star Trek editions of Fluxx. Other surprising games that we got to play again after an unintended hiatus include city-building Suburbia, the annoying difficult Shadowrun: Crossfire, and the speedy narrative game Machine of Death. It was nice to bring them out, like old friends you haven't been able to talk to in a long time. They're all fun in their own way and remain valued parts of our game collection.

I hope you had a great October when it comes to gaming! I wonder what November will bring to the table.
gaming GeekyGayming sietch life tabletop gaming Tobie