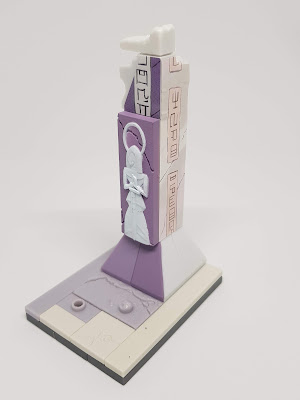 I was surprised that a bunch of my birthday purchases arrived all at the same time. I guess it was lucky that we were all home when they did as I wouldn't have been comfy with that many packages left at reception.

The bulk of the deliveries were the various Steven Universe MacFarlane Construction sets that were first released in 2017. Thankfully Amazon helped me gather all of them before they totally disappeared and they're cute little creations indeed. This is the Macfarlane version of LEGO-style building sets albeit with a bit more focus on collectors given the stickers are applied over multiple bricks at a time thus you'll never separate them in the future.

It was also an opportunity to try taking photos with our new lightbox and the results are pretty good. At the very least they're a lot clearer than my usual photography - what a world of different additional lighting can do for you, eh?

The bigger question, as usual, is storage. I've no immediate idea how we'll address that, but for now, we'll just enjoy all the crazy geekery of the Sietch wholeheartedly.
sietch life Steven Universe toys