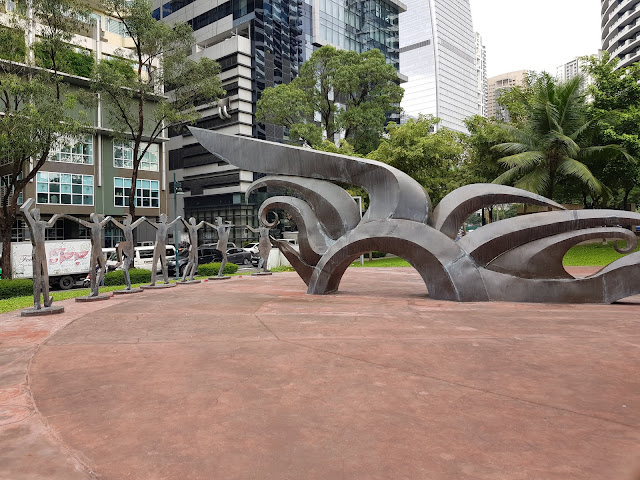 The Parents - It always starts with the father and his toddler daughter arriving at the park with a stroller in tow. I've rarely seen the little girl in the stroller so this walk is part of an effort to get her out of the house. The dad is always in long-sleeved office attire and tends to be a little sweaty, but he makes the trek every day. Eventually he is joined by the mother who takes over walking the little girl around. They always bid him goodbye and then the father heads to work with his little briefcase.

The Maid Brigade - It's inevitable to run into a helper walking the dogs of their employers when in BGC. But every morning in the park a group of three helpers managing 5 different dogs always have a congregates and sits down to chat while their canine charges bark at me when I jog past them. To be fair, I don't know how long they've been walking around the area by the time they get to the park, so I can't fault them for resting. But every morning most of my time with them involve them sitting and not doing much walking.

The Scooter Couple - Sporadically I encounter this East Asian couple who cut through the park on their motorized scooters. They don't do much but it's pretty memorably when they zip by and take the same route that cuts across my jogging path.

The Little Prince - There's a helper who regularly has to walk a little boy around the park as part of her morning duties. They often tug along a toy dog or a toy turtle on a string for the boy to play with. They often end up stopping to join the maid brigade and some of the dogs do seem to like him.

Cleft Chin Guy - I'm recent weeks there's a Caucasian guy who passes by the park with his little brown poodle. He always walks the dog off-leash while at the park but he visibly carries the dog's black leash in hand, so I assume the relative freedom is because of the park environment. He always wears a cap and tends to have a 5 o'clock shadow and a seriously deep cleft chin that makes me wonder what's the largest object he could possibly hold with his chin, as strange as that sounds.

Starbucks (Non-) Runner - Recently I encounter this guy all dressed up in sports gear and with a Starbucks drink in tow. He obviously comes from the nearby Starbucks Reserve at Arya. He always has a cap and shades on and is visibly wearing headphones. But I've never seem him jog or work out in any way while at the park despite being in matching exercise gear. He just finds a place to sit, finishes his drink, then leaves. Maybe he's on his way to the gym and just likes a little nature time first. At least he doesn't litter.