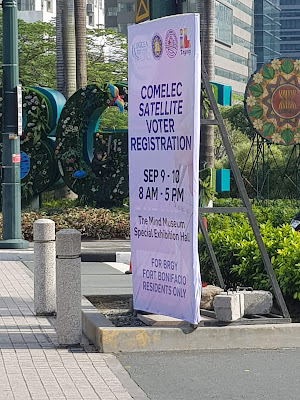 I have never voted in a local or national election. For the most part, I've largely justified my non-participation in local politics with a conscious decision to abstain from voting due to a lack of candidates worth voting for. It's an easy enough position to argue for given the actual quality of Filipino politicians but of course it's still not the ultimately right course to take in life. I still have strong principles about wanting to vote for people I actually believe in, but some compromises need to be made in the current political climate.

In one of the books I read in recent months (for the life of me I can't remember which one it was), the characters were arguing about voting in democratic elections. The daughter, like me, had strong feelings about the quality of candidates and wanted to make a stand. The parent (I think it was her mother, who was somehow involved in politics) snapped back that democracies can't always be about voting for perfect candidates but instead it's about voting for the best among who are running. It's a slightly jaded view of things, but ultimately it's a good point.

So today I finally registered to vote. It was a somewhat tedious but not terrible process. At least BGC's satellite voter's registration efforts were pretty comfortable given it was at the Mind Museum, so I can't really complain. It took me about 2 hours to get it all done and that included a moment of judgment from the COMELEC officer who questioned how I could be a first-time voter at the age of 37. But hey, I deserved that.

I'm still not 100% sure if I'm going to actually vote in the next election - but at least I actually have the option to do so this time around. I'll know better once we know who is actually going to be running in the next elections and then I'll really need to make some decisions. It's a long road from here to there, but at least I'm finally on it, right? Better late than never, as a lot of friends have said in response to my very, very, very late first voter registration.
inner ramblings sietch life stop the presses