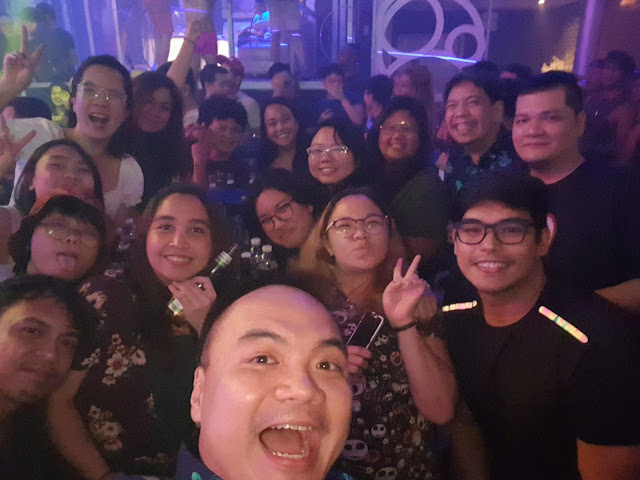 So what else do I want to say about Friday night? The initial excitement and adrenaline-fueled euphoria have passed and now I'm just feeling pretty tired. Still happy and overwhelmed by the events of the weekend, but physically weary nonetheless.

The big birthday celebration felt like quite the gamble, admittedly. I wasn't sure how we were going to handle so many different people at the bar, especially with half of the invited guests being first-timers. Tobie and I are generally careful when we bring new people since we always want their first time to be a positive experience. The fact that this batch of newbies was my team at work was just an additional complication of sorts. On the flip side, the other half of the group were all good friends who had been to O Bar at least once but who hadn't exactly hung out together. Tobie and I were the only connecting thread between everyone and so there was that sort of obligation to help everyone socialize a bit more to help everyone have fun.

The first few hours before the drag show was the funnier bits for me since it involved little to no alcohol for me and a lot of repeated introductions as people arrived. I don't quite know why I thought it was a good idea to try and introduce everyone to everyone else in the middle of a noisy bar with a significant payday weekend, Friday night crowd, is a little beyond me. But it made sense at the time and I did my best to help people get to talking before the drag show began.

We had booked two tables to try to accommodate everyone, but in hindsight, I kind of wish we had booked three given some were still available right up until the start of the show. Plus our final bill for the night could have accommodated a third table with some allowance to spare. When Tobie and I went over the numbers earlier, he broke it down to a pretty good cost per person given a full night at O Bar and two fabulous shows. That's a pretty good deal indeed, I suppose, even if my memories of the latter part of the night are rather hazy. It was THAT sort of a night.

I'm still going over all the photos from the night and I can't help but laugh at some of the antics. It was really to nice to have so many different friends mingling together with some of Asia's best drag performers captivating everyone. We love O Bar so much and it only makes sense that my birthday celebration was another avenue for sharing and celebrating that love with others.

I think what I enjoyed the most from the night was the repeatedly feeling of connection with everyone. I couldn't quite hang out with everyone all the same time - that's just a physical (and temporal?) impossibility. but I did feel like I had a lot of great individual moments with everyone who showed up, and that made things truly emotionally memorable. That Friday night was a lot more meaningful to me than I thought it would be and it was one of the better celebrations of my solar orbital anniversary.
birthdays O Bar social networking Tobie