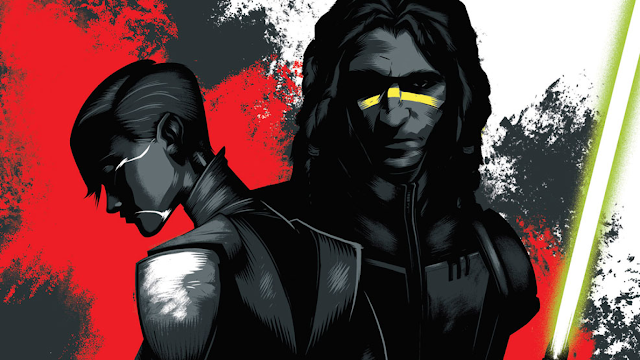 During today's family time (which involved getting a foot spa at Mom's favorite salon), I finally finished reading Star Wars: Dark Disciple. I had long been looking forward to exploring this unproduced Clone Wars story.

I was not prepared for the direction this story would take. It was more than an opportunity to tell another Asajj Ventress story or to add more light to the character of Jedi Master Quinlan Vos. Instead, the book turned out to be a complex narrative that revisits the journey of Asajj Ventress and her relationship with the Dark Side. It's also a story of the Jedi Council inadvertently dipping into the dark as well when they decide that assassination is a viable course of action for the good of the galaxy. And it's the very personal journey of Quinlan Vos as he tries to fulfill his mandate to the Jedi Council but instead learning far more about the Force than he had anticipated.

I mean wow, this is a serious book and considering how this was the plan for at least 8 episodes of the original Clone Wars animated series, it just reaffirms why it was such a great show. The original Expanded Universe books (now Legends) first got me fully invested in the Star Wars universe. Star Wars: The Clone Wars gave us some of the best stories of the prequel era. Star Wars: Rebels really established my faith in the creative vision of Dave Filoni. And now all these additional materials tied to the old unfulfilled Clone Wars stories just deepens my love for the franchise even more.