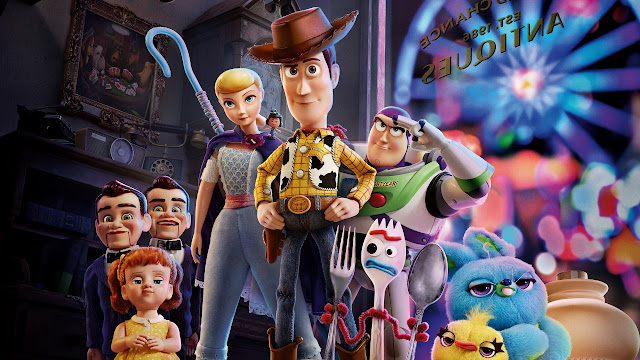 So this afternoon we watch Toy Story 4 as we had already seen Spider-Man: Far From Home earlier in the week and we were looking for something to do today given the originally scheduled game was canceled. I wasn't particularly excited to see the movie since I was of the mindset that the franchise didn't really need a fourth movie after the ending they crafted in Toy Story 3, but here we are.

And to some degree, if felt like the Pixar folks also were not 100% about this movie, or at least that's the impression that Tobie and I had. There was definitely a feeling that they had to make this movie but in order to avoid this problem from coming up again in the future, the writers created a story that made sure to close the door on future movies. It's not impossible for this to still happen of course but the way the movie ends does make it a heck of a lot harder to just bring the gang back together for another adventure.

But beyond that, the movie is still pretty great. It's not necessarily the best Pixar movie nor the best Toy Story movie but it's still pretty solid and very smartly written. The movie has a lot of narrative highpoints for the different characters and once again subverts our expectations of where children's movies always need to have good guys and bad guys or other things of that nature.

Now we're just waiting for friends to drop by to play board games tonight. No RPGs planned (but a one-shot is never impossible) and should just be chill fun for the night.
gaming inner ramblings moving pictures sietch life tabletop gaming