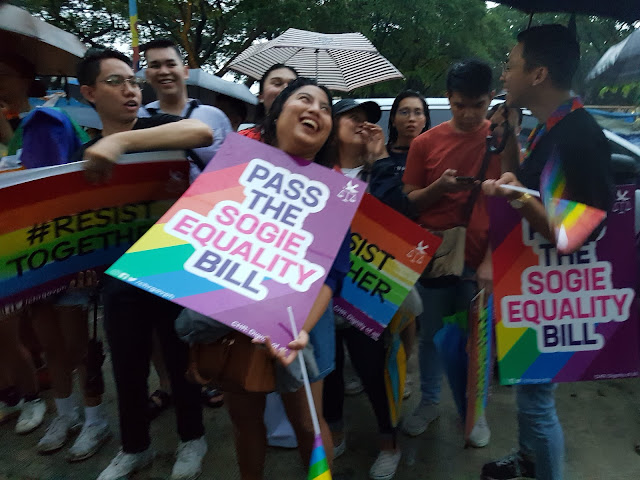 The Metro Manila Pride March this year counted a record 70,000 attendees, which is about triple the number last year. Despite the rains, we were among those who decided to go this year mainly because of the large turnout last time. I guess a lot of people had the same idea, plus all the recent discussions about things like how the SOGIE Equality Bill continues to languish in the Senate and thus failed to become law under the 17th Congress.

Things could have been better despite the pre-event social media information efforts, on-the-ground information was a little harder to come by. It wasn't immediately clear why getting into the venue was taking so long and for people not part of groups there was not a lot of reinforcement of where to go and who to march with. And when the march itself actually began sometime after 04:00pm, we were still in queue to leave the staging area two hours later with no idea what was going on.

But outside all of that, it was still a great event and while the organizers could have done better but they certainly put a lot of effort into making sure they still managed to get through the program.

If anything, this feels like a reminder that perhaps it's time we need to grow beyond the Metro Manila Pride March as the central event and instead encourage other cities and communities to put up their own Pride Marches in their area. Yesterday there were buses that brought BPO employees all the way from Pampanga to join the Pride celebrations, which wasn't inherently bad. But it would have been better for Pampanga cities to have their own Pride Marches as well. Rather than trying to find a bigger location for bigger Metro Manila Pride Marches in the future or burdening the volunteer organization to grow its members to better handle upwards of 100,000 possible attendees next year.

It was nice to be part of a large community event like Pride though and we saw a good number of familiar faces at the event. But as is our tradition we continued on to go to O Bar for their 9th annual Pride Party event. We appreciate the larger community but there's something about our more intimate O Bar Family that really makes these events feel like coming home - in this case, a second home.

Pride wouldn't be complete without an O Bar celebration as part of things. Beyond the consistently amazing drag performances, O Bar means good time spent with the close circle of friends we share that consist of the owners, fellow regulars and other members of the staff. They put so much effort into delivering a great experience for guests each and every night and I will always feel practically obligated to help support them in whichever way I can. It's our way of showing gratitude for all their generosity and kindness to patrons like me and Tobie.

Happy Pride, everyone. Hope you had a good one, no matter how tiring things may have gotten.
O Bar queer life stop the presses