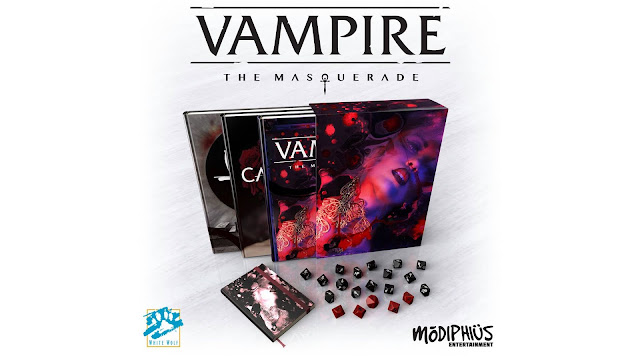 We just finished a one-shot for Vampire: The Masquerade 5th Edition and it was quite the crazy little adventure. Our small group consisted of a Toreador model, a Malkavian bar owner and a Nosferatu fashion designer (me). The game started out pretty light with my biggest problem being whether or not I'd agree to go to New York Fashion Week funded by the Toreadors but ended with a surprising bit of horror that was gripping the city. Everyone had a lot of fun and there was the definite wish that it was more than just a one-shot and more an on-going chronicle. Only time will tell if we'll be able to make time for it in the future.

Vampire is a tricky game not because of its rich narrative or its expansive back story but more because of the odd coincidence that our Vampire chronicles never seem to reach a proper ending. Ever since Tobie introduced me to RPGs in 2009, we have played in numerous Vampire games that would last a few months and then eventually need to stop as real-life obligations would change people's schedules. There's no logical reason for why this would be so, but it just keeps happening with this particular game line while other games like Houses of the Blooded, Orpheus and DC Heroes managed to last months or even years and all reached good endings.

But hey, maybe our luck will change sometime.

This fifth edition of the game has a general feeling of being familiar but different given all the little tweaks made to the system here and there. It's still a lot of fun and the shift to hunger dice from a blood pool is a surprisingly good change to the system that allows for more awesome moments while you craft a story for your character while still dealing with the threat of your growing need to feed the Beast in you.

Here's to more games in the future and meeting more players who share a love for the hobby.