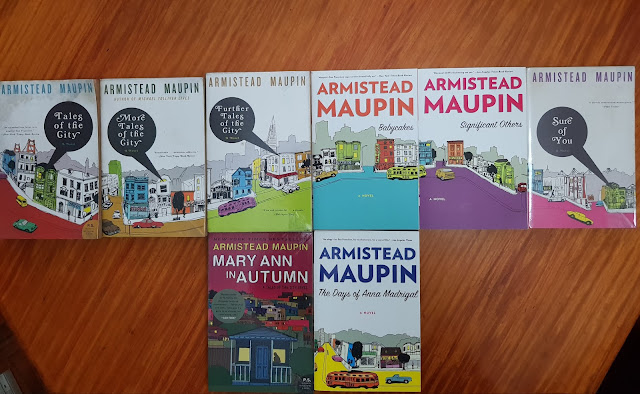 Since it debuted last week, Tobie and I have been investing some Sietch time to watching the new Netflix Tales of the City series. It's an interesting effort to revisit the world of Amistead Maupin given the many adaptations of the different books that had been released over the years. I still haven't read all of them given the strong obsession I've had over trying to collect a coherent set that largely reflected one version of the covers, to which I haven't done all that well but at least I have something.

As is often the case with a lot of these LGBT shows, especially those adapted from books, the show is filled with brilliant one-liners and powerful moments here and there. And this new show tries to address a lot of different aspects of modern LGBT life including the difficulty of navigating the nuances of transgender life, the generational and cultural gap that segments the community itself and even the quirkiness of threesomes. It's not the romp-fest that was Queer as Folk or Looking but it's powerful in different ways because of its familiarity.

In other queer news, we're also mapping out the possibility of attending this year's Metro Manila Pride March. The last time we had marched was during the last one held on Quezon City (as far as I can remember) and we've yet to make the trek to Marikina, who has been hosting the march in recent years. We'll see how that goes.

At the very least we'll definitely attend O Bar's Pride Party on the night of the March. The events are not directly related to one another but admittedly O Bar still feels more important given how they're pretty much part of our family at this point.
O Bar queer life television