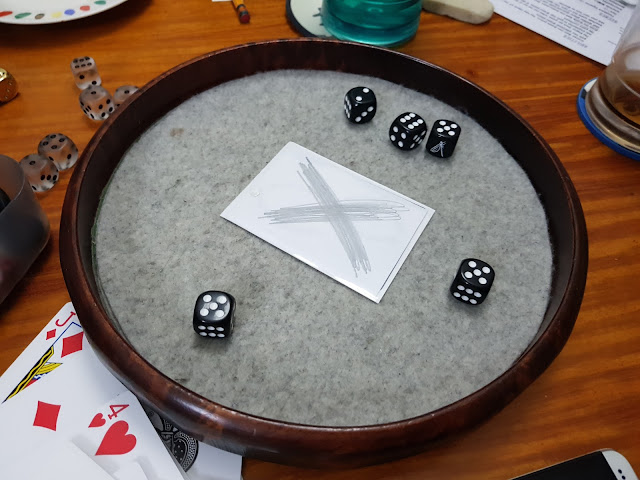 During yesterday's Greasy Snitches RPG breakfast event centered around the game Call of Cthulhu, part of the tips being discussed included modern TRPG safety tools such as the X-Card. For context, the X-Card is a card or piece of paper left on the table and players can tap the card whenever they feel the subject matter gets too intense or makes them feel uncomfortable with continuing the game further. It's pretty important, especially when gaming with new people that you may not know well.

As this was being discussed in yesterday's breakfast, one of the older gamers present made a remark along the lines that "We didn't need those things before." And before anyone gets into heated arguments as to the need for safety tools, his explanation was an interesting one. Paraphrasing his statements, his stress was that people were friends first who then decided to game together. Therefore anything that happened at the table happened under a relative onus of trust and thus it was understandable that game stuff was game stuff and that all ended when they left the table.

His statement was not one meant to disparage safety tools but more to stress how different the gaming culture was before, at least within his circles. Safety tools are still pretty empowering when it comes to gaming with strangers and other people whose backstories and potential traumas are unknown to you. It's more that gaming with strangers was not as common before as it is now. The hobby has reached sufficient popularity such that there are big gaming events like conventions or even these breakfast meet-ups and more and more people have discovered that they're not alone in their love for rolling polyhedral dice.

Meet-ups like the breakfasts certainly provide a unique opportunity for gamers of different backgrounds and experiences to meet, share stories and provide a richer context for how the hobby has changed over time and how it's different for every gamer. And we're all made the better for it because it's through learning from one another that we can work together to make the hobby even better.
all the world's a stage gaming inner ramblings