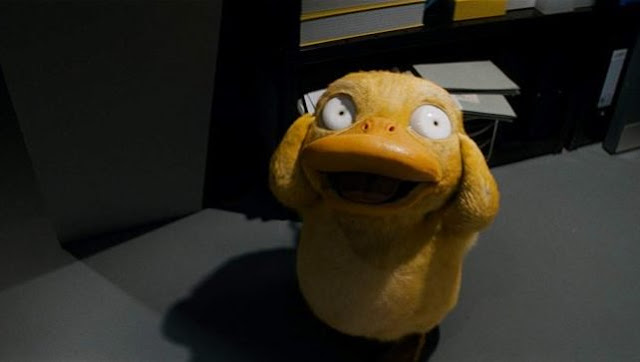 Tobie agreed to watch Detective Pikachu on its opening day with me despite the fact he's never really engaged with the franchise all that much. However, he loves me and he knows how much I have an odd fascination/love for Psyduck, so I really wanted to see him on the big screen.

The movie was a lot of fun, don't get me wrong. The action was great, the story was solid and the filmmakers wouldn't let 5 seconds go by without one or more Pokemon appear on screen somehow. We really enjoyed it.

But I was going nuts for Psyduck.

He was super adorable all throughout and borderline useless, as was his characterization in the animated television series. You know they'd find a moment to deal with his near constant-migraine sooner or later given how it has been mentioned frequently in recent trailers and the payoff was great.

And I just love Psyduck.

He may not be the best detective material compared to the likes of title character Pikachu, but he looks really adorable in a backpack or even just waddling around. And that's good enough for me.
moving pictures Tobie