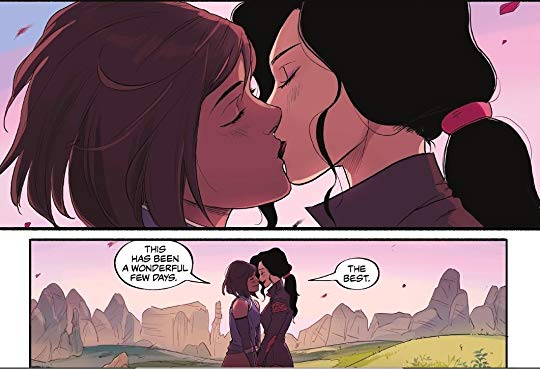 I just finished reading The Legend of Korra: Turf Wars and it was a fun little adventure very much in tune with the tone of the show. And it was super gay as they made sure to be 100% clear about Korra and Asami being together romantically. And given the book picks up the story right after the end of the series when they enter the spirit portal.

I have to admit that I was one of those viewers who didn't quite see how the characters had "earned" the ending of the series and it felt like another case of an LGBT narrative being tacked onto the show. Looking back, I was probably being a little too hard in terms of what I was expecting from what is primarily designed to be a children's series. They did what they could and in the end, the character journey was what it was.

The comic books, on the other hand, went all out and gave us another adventure involving humans learning to coexist with the spirits AND a story of young LGBT love and the different opinions people may hold. It didn't go too deep into things and largely tried to normalize them being a couple with only a few touches of discomfort and conflict here and there. And there was a fair amount of kissing and public displays of attention thrown in for good measure.

Sometimes you just have to celebrate what wins you get.
comics inner ramblings queer life