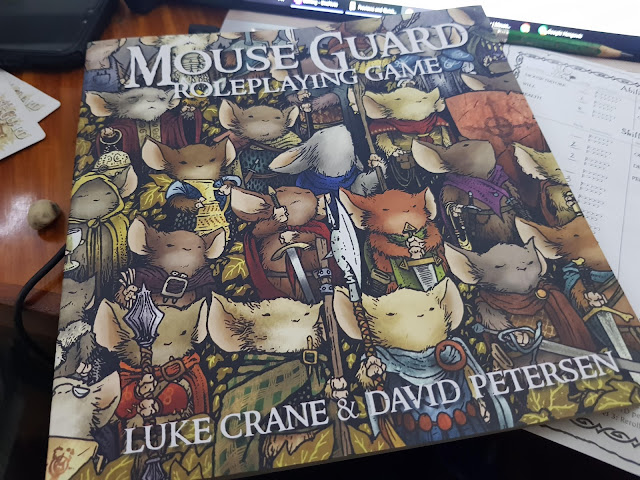 Going straight into an RPG session after a flight may not sound like a good idea but our games are always important parts of our social calendar so that was that. But our scheduled Pendragon game couldn't push through with one of the players out and so we have pivoted to try out Mouse Guard instead.

I've read most of the comics, but that doesn't quite translate into automatic player knowledge for the game or any sort of advantage. If anything I've opted to play more of the pathfinder of the group since I have a decent understanding of the unique world of the game.

We've repeatedly talked about playing the game but admittedly I've been nervous to try it mainly because of what I know of the comics. The brave mice of the guard end up needing to face some pretty scary challenges in the form of snakes and owls and other natural mice predators and that's not easy even for armed mice. But here we are, a group of tender paws braving the dangerous world of this story setting. Wish us luck!
gaming run the world sietch life tabletop gaming