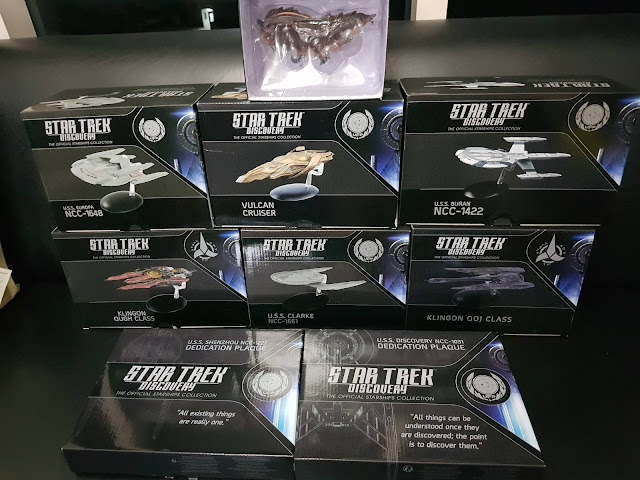 For the longest time, we've been relying on the generous support of Tobie's brother to help with certain US-based purchases, one of the more persistent among them being my subscriptions to various Eaglemoss model lines for different Star Trek ships. More and more we've been trying to figure out alternate arrangements so as not to burden them so much and to possibly get things to the Sietch sooner.

Having things shipped directly to the Philippines is rarely a good idea as the local post office, particularly the customs officers, are more than likely to charge an arm and a leg for any such purchases. Plus we've had a few items get lost over the years when they go by standard post so that just reinforces that notion that they're not a reliable service.

After social media consultations on good forwarding services, I've signed up for My Shopping Box and have reoriented my Star Trek subscriptions to them instead. This month's ships have already gone out so I'll have to wait for next month before things officially switchover, but I'm pretty excited. Once next month's Eaglemoss ships go out, I'll probably make a few other orders to try and catch up with the regular subscriptions before I confirm all items for trans-Pacific transport. And as a minor consolation, I've discovered that the service is also a Shopback partner, so at least I'll get 4% cashback on any shipping arrangements I make through them.

It's definitely going to be more expensive than waiting for a Balikbayan box to get filled with geeky gear, but it will mean getting stuff sooner and we stop bothering friends and family with these shipments. It's quite the geeky burden.
family sietch life Star Trek toys