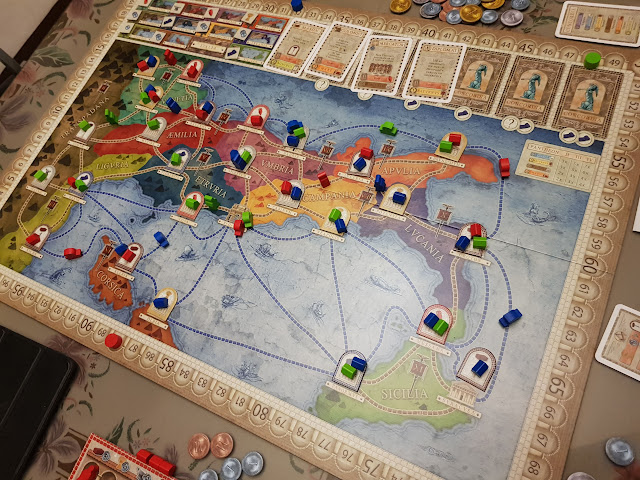 Our last game session for the year involved some good friends and a long night of board games. We got to test out some of our newer games from Christmas, in particular Root and Concordia along with continuing our Fabled Fruit "campaign" and a return to our long-time favorite Legendary because of the more recent X-Men, World War Hulk, and Ant-Man expansions rounding out the mix of characters for the game.

We played for quite a long time and wrapped up closer to 06:00am after some post-game conversations, as is always the case. Funnily Tobie was still in the mood to play and thus we brought out Legendary again to try a few more scenarios to have us try and defeat various villains. I actually did pretty well in both games, which made up for our Legendary loses earlier in the night.

It has been raining for most of today so it looks like we're going to have a rather overcast New Year's Eve. Not that this is all that big a holiday for me given within the past decade or so I've resigned to staying safely indoors during New Year in order to avoid triggering an asthma attack. Admittedly overall fireworks volume seems to have been in the decline in recent years with the government generally dissuading the public from using them more and more. But I'll be happy to stay safely inside a well-ventilated condo rather than braving the smoke and dust.

After midnight we'll be heading to O Bar as part of our now traditional holiday celebrations with our extended family. Expect more crazy posts and videos once I get the time to process everything. Then I'll promise we'll slow down on the drinking given some pretty full weeks of partying as of late. But that's the holiday season for you. And it has totally been a lot of fun.