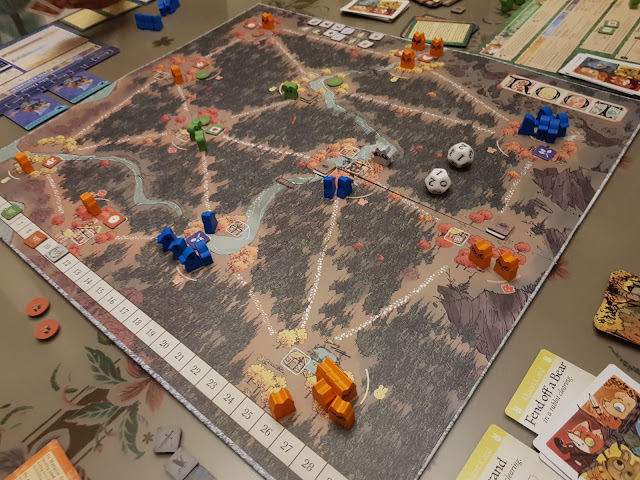 One of Tobie's Christmas presents for me was a copy of the game Root, which is a asymmetric strategy game that had a lot of strong buzz as it was coming out but some mixed reviews upon release.

The game is absolutely beautiful as a lot of love went into the design of every component, thus you end up with a collection of adorable wooden animal tokens and cards with adorable art. Personally I was mainly worried that the gameplay wouldn't be to my liking since it initially came across to me as an area control game, which isn't necessarily one of my preferred gaming genres.

But after a few games I'm starting to see the appeal of the game and I appreciate the complex balance the designers have achieved with all the different elements of the game interacting. And while number of pieces is a factor in determining control of individual clearings in the forest, the game as a whole isn't necessarily won through traditional area control principles.

Instead each faction has their own unique play style and distinct path to victory, resulting in very different game experiences. I haven't been able to win a game after trying three different factions but I've still enjoyed the process of trying out different strategies for winning. And that's really where the charm of this game lies and I foresee us playing this more just to test it out even more and see how different players try to use the factions to their advantage.

But so far, I'm really loving the charm of the vagabond. He doesn't have an army of tokens and can actually just keep playing a side game with the other factions go to war. Cute little Tinker.
gaming tabletop gaming Tobie