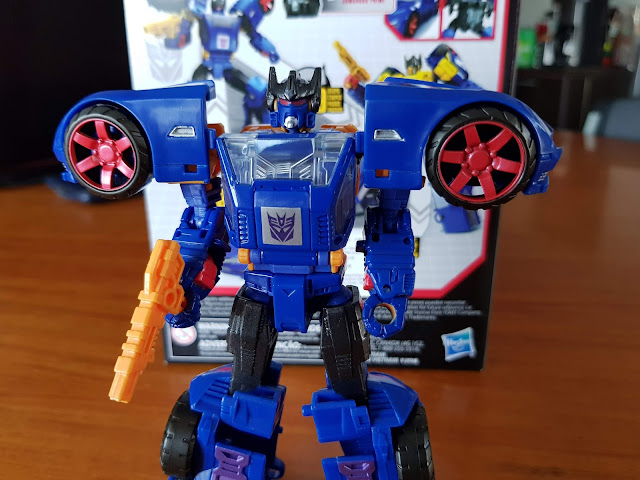 Today I unboxed a lot of my Transformers purchases from earlier in the year and among them was the new Power of the Primes version of the classic G1 character Punch-Counterpunch. This Autobot spy (Punch) with a Decepticon alter-ego (Counterpunch) had never appeared in the main G1 cartoon series but had always been a character that had captured my imagination once I had first spotted him in the catalog. I had literally pretended to have him among my toys or even to be him in my childhood role-play because the notion of a spy felt so fascinating to me.

I never had the G1 version of this toy and had missed out some other collector's edition retools of other figures meant to homage the original. I've always kept a look out for those limited edition variants but had yet to feel they were worth investing too much money into unless we were talking about the original G1 toy.

So this more recent edition was a find even if it was originally positioned as an Amazon-exclusive. The recent sculpts and molds for the Prime Wars Trilogy toy lines have been great and many of them represented joyful celebrations of different G1 characters. So I was pretty excited for this figure and was very happy when I finally opened up the box and tried transforming him for the first time. The switch between Punch and Counterpunch was actually pretty intuitive and I only had to make a minor repair to account for a document assembly error that had affected the figure. The end result is pretty great and I'm really happy to have this figure among my ranks of Autobots.

The whole Transformers Generations line has remained to be a more collectors-oriented toyline and their releases over the years have continued to find ways to re-issue or reimagine practically every character from the G1 line. And admittedly they're reaching a point where I bet it's already a challenge to find new characters to bring to life as they've been at it since 2010 at least, not counting the Classics releases that first came out in 2006. There are only so many G1 characters out there and a few have already received multiple versions like the mainstays Optimus Prime, Megatron and of course Bumblebee.

But the moments that really get me going are when more obscure characters like this one get some love. And then the whole hobby just continues to make sense for me and thus the collection continues to grow. It's a pricey hobby that takes up a lot of space, but it's one that still makes me happy. And thankfully Tobie remains in full support despite how the Sietch looks like a toy store sometimes.
sietch life toys Transformers