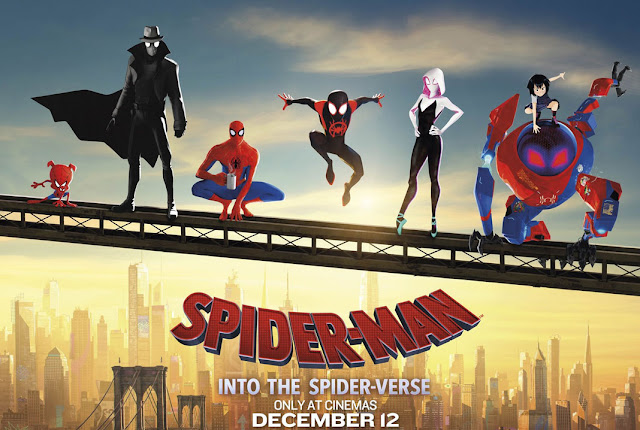 Spider-Man: Into the Spider-Verse was simply AMAZING.

As a life-long Spider-Man fan who got burned by the Clone Saga back in the 90's, admittedly it was Dan Slott's Spider-Verse crossover comic book event that got be back into reading Spider-Man stories. And when they announced that they'd be doing a movie that not only centered around Miles Morales as Spider-Man, but would also somehow tie into the larger spider-verse mythos, I was pretty curious. After the trailers hit the internet, I got genuinely excited to see how they would interpret the story. And I was already loving the distinct animations styles they had given each of the different dimension-crossing Spider-people just added to the visual flair of things.

I thought I was already prepared for a good movie experience. I didn't expect to get my mind blown.

First, the movie is a celebration as a pop culture icon and a comic book creation. They immediately made reference to different types of Spider-Man merchandise, the jingle from the old Spider-Man cartoon series and other funny bits. The animation style was distinctly jerky, as if they were skipping frames to not make things feel super realistic in the manner similar to the jerky motions of characters in The LEGO Movie. Throw in visual cues for sound effects, thought bubbles, scene transition labels and even the occasional word balloon and we get fully reminded that these are comic book characters brought to life through animation.

Second, the writing for this movie is amazingly tight. This is a solid origin Spider-Man origin story for Miles Morales. This is a solid Spider-Man crossover event featuring various spider-related characters across different franchises. This is a solid Kingpin story. Despite all these different elements in play and the need to remain kid-friendly while still telling a story that appeals to all-ages, they managed to pull it all off tremendously well and the comic book world is made better by the existence of this movie.

Third, it's a heck of a lot of fun. The different elements of this movie just came together beautifully to make for a truly enjoyable movie experience that is well-poised to bring in new fans while still having enough easter eggs for hardcore fans to enjoy. Heck, even the end credits animation sequence is amazingly fun even without a post credits sequence weaseled in. But yes, there is one at the very end and it's definitely a fan nod more than anything else.

I honestly hope this begins a new era for Spider-Man movies - one that leads to more colorful sequences and further explorations of the stories of the Spider-Verse. Only time will tell.
moving pictures Spider-Man