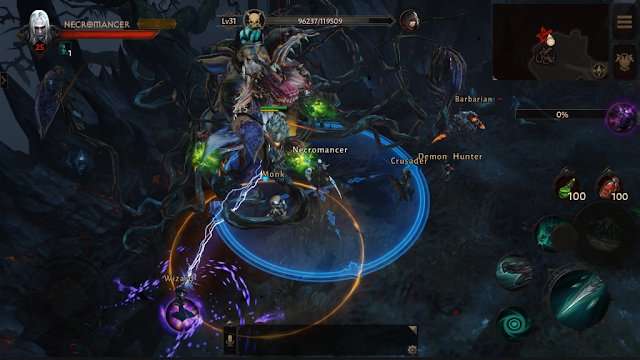 When LAN gaming was on the rise, the original Diablo game along at just the right time. It was such a different game that provided a unique cooperative playing experience tied to a rather rich story and awesome gameplay. And that pretty much made me a rather devoted fan of the series. There was a bit of a wait between editions but I'd always come back to explore Sanctuary, find out what evil is troubling the land this time and find friends to help me brave the hordes of Hell.

The Diablo Immortal mobile game announcement was a very annoying one that naturally triggered a very strong emotional reaction among Diablo fans. It's not that the game is bad nor do I think that Diablo can't work on a mobile device. But to make this game announcement essentially the keynote panel of this year's Blizzcon without any sort of confirmation that Diablo 4 is happening apart from vague assurances that multiple Diablo projects are in the works is just irresponsible.

And it's not a lone trend. With more and more PC franchises moving to mobile, as seen with Dungeon Keeper, Command and Conquer: Rivals and now this, I don't think Blizzard can be all that flabbergasted that the negative reactions to the announcement have been this vocal. Diablo has been a PC game for the longest time with only recent ventures into console support being decently playable (OMG Diablo 1 on the PS One was WEIRD). And the way this Blizzcon announcement was handled just felt like the harshest, most palpable reminder that the new Blizzard has different priorities and it's shifting more and more away from the seeming support for fans they've claimed to bank on in the past years.

But hey, maybe they'll salvage this by making a sudden announcement for Diablo 4 sooner rather than later. Or maybe they'll figure out a way to port Diablo Immortal to PC and allow for players on both platforms to interact. Who knows, right? Not everything is lost for the franchise. Fans are hurting, but they're not entirely lost just yet.
computer gaming Diablo gaming inner ramblings