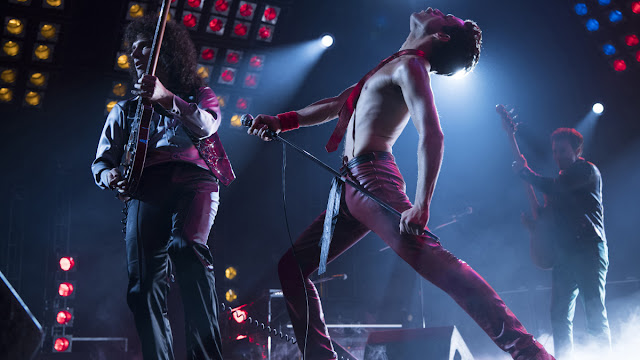 The legendary rock band Queen has always played a big role in my life. Their music was ever-present while were growing up and things really got cemented during a summer when the only cassette tape in the van was the Best of Queen and we listened to it every day over the course of a summer vacation and a lot of those songs just got burned into our collective memory as kids. But I have no regrets - it's great music that's always worth celebrating.

And so we watched Bohemian Rhapsody today mostly curious as to how it would turn out given the mixed critics reviews and complaints about things being shallow or even sanitized. But we walked out of that theater with hearts pumping and hearts full of the triumphant music of Queen and a better appreciation for the band and all the struggles they had gone through. It's not a perfect movie but I think it was still very well done and one that nicely depicted their story in a respectful way.

In the end the movie was very, very Queen, as weird as it is to say that. It's hard to pin your finger on it in precise terms but I always associate their music with the feelings that I experience while listening. And I won't lie - there were a few moments in the movie that I teared up more because of the songs than the scene in itself. But hey, the lines blur and who's not to say that what they chose to show didn't tie into music.

But a lot of the emotional impact of this movie really falls upon the shoulders of Rami Malek, who did an amazing job as Freddie Mercury. There were a lot of moments during the movie that we pretty much would forget that it wasn't actually Freddie Mercury up there on the screen since he clearly put a lot of work into portraying him as best as he could. I wouldn't be surprised if he gets awards nominations for his performance in this movie - it would be totally well-deserved.