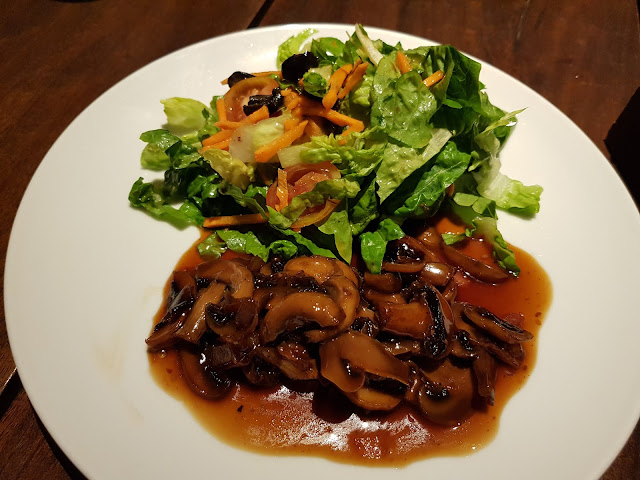 Since I still have work this week while Tobie gets the local holidays off, I figured it might be nice to eat out for dinner. But of course that's never easy while you're on keto and so this required some thought. At bare minimum I was generally sure that I could eat at Salad Stop! since they have a customizable salad option.

But for tonight we decided to finally check out Susi since it was rather intriguing that they advertised as being both vegan and gluten-free and it has been said that a lot of gluten-free options tend to be keto-friendly. I was hoping one of their pasta dishes would involve the likes of shirataki noodles but it turned out they use a very carb-rish gluten-free pasta instead. So I tried their mushroom adobe and swapped out the brown rice for a salad but was disappointed to taste that everything tasted pretty sweet. At least Tobie generally enjoyed his vegetarian pasta which had some great baked eggplant mixed in. But it looks like Susi will not become one of our regular places to eat while I'm on keto.

So far the best options are all customizable ones. In BGC that means the various Salad Stop! locations or Poke/Poke at SM Aura. We've tested Japanese as far as sashimi is concerned and their tori barbecue without the teriyaki sauce. And then...that's about it really. I'm not keen on trying any of the buffets since it's harder to determine what goes into their marinades for meat unless I can make sure I only end up with the very plainly seasoned stuff with only salt and pepper maybe.