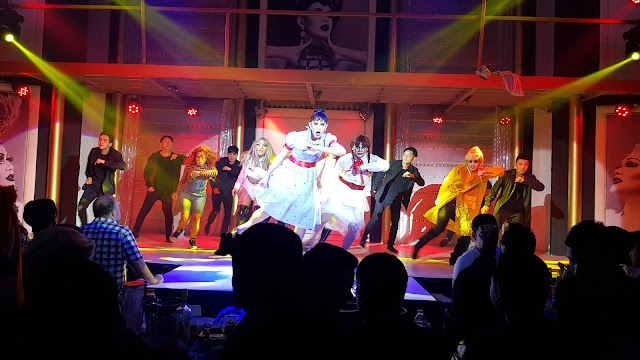 How we managed to juggle the O Bar Halloween event in-between the ESGS days is a little beyond me but we somehow did it. We had fun with our Breaking Bad costumes even if we were pretty sure most would not understand why we were so bundled up in the middle of a crazy bar party but while sometimes costumes are for showing off, a lot of times they're more for you.

And I totally don't regret running the gauntlet of juggling both O Bar and ESGS as we had the unique pleasure of seeing our O Bar friends and family in some pretty creative gear and unusual numbers like the O Divas dresses as various horror movie icons while dancing the forever crowd favorite Tala by Sarah Geronimo. The photo above sort of captures a moment from the show but it really doesn't do the whole night justice. It was crazy, crazy fun.

Our last day for ESGS started late given last nights alcoholic shenanigans but I think we still had a good day. Tobie enjoyed meeting new people and connecting with members of the local indie gaming community and I think we generated some good buzz for his upcoming book Once Upon A Time in Jianghu. He even got to help judge some student game projects even if this ended with him being the last to turn in his scores given he was busy manning his own booth most of the time.

But now Tobie is pretty much drained and has essentially lost his voice from all of his talking to people over the past 3 days. I'm just trying to cover my daily blogging duties before joining him in bed. As much as I do enjoy reading more and staying up as much as reasonably possible given the looming work week, we definitely need more rest after the weekend.
gaming O Bar tabletop gaming Tobie