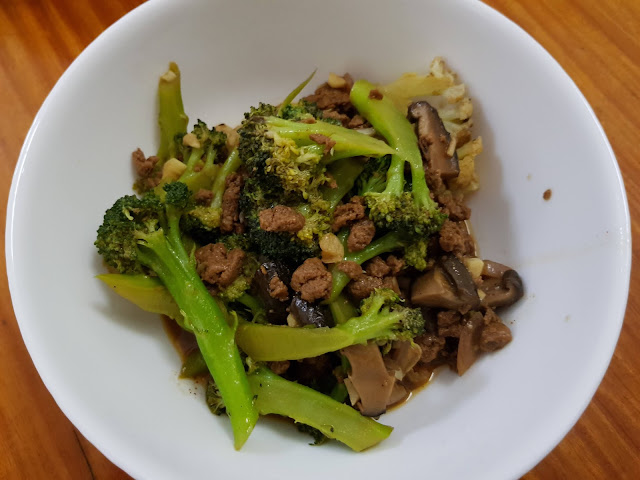 Tonight I ended up making a weird vegetarian-appropriate meal of Quorn mince, broccoli, cauliflower and shitake mushrooms in a buttery, oily medium. I guess we can call it a veggie bowl mainly because I served it in a bowl and the final result doesn't involve any actual meat. Plus that's easier to do than listing out all the ingredients.

After nearly two months on the keto diet, I generally know what I should and shouldn't eat. But sometimes putting those pieces together to come up with things to cook is where the greater challenge lies. And naturally I want to try cooking different things so we don't end up eating the same things over and over again. Plus I've also had to give up on a significant portion of my cooking staples like all my variations of pasta and my fried rice mixes.

So tonight's dinner was okay but not great. I probably should have just cooked the veggies on the side instead of trying to mix them into the Quorn mince. I really should consider getting some sort of a food processor so I can make cauli rice or broccoli rice for future meals. Our now useless GoChef could also be replaced with something like an instant pot or an air fryer but I'm not quite sold on which direction to take just yet.

But at least I'm sticking to the keto diet for now. My weight loss numbers are already in the 17 pound range but I still have a long way to go before I'm fully content.