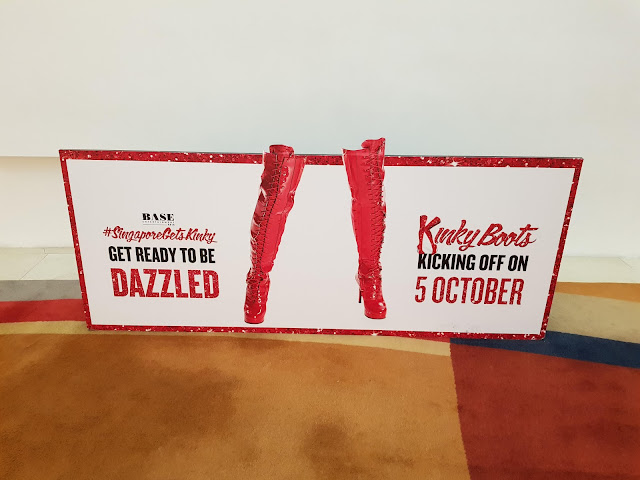 So things came together and my brother and I managed to watch the touring production of Kinky Boots at Marina Bay Sands today. And this was despite a lot of weird obstacles along the way.

First, last night we noted that our key cards weren't working for the door to our service apartment. But since folks were around to open the door last night, it wasn't something thought overly of until I tested the other keys issued to us and found that they all weren't working anymore despite working for things like the gates to the compound or the elevators. So I got that sorted with the front desk this morning with the initial diagnosis being the batteries within the door unit had run out. But when they checked the door itself the problem was a bit more significant and required that they contact their contractor to replace the door assembly. So that required that someone had to stay in the unit in order to prevent the rest of us from getting locked out indefinitely.

Then there was this morning's weather, which got especially raining at around 11:00am as we were working out the logistics for today. I had initially mapped out walking to the office (which isn't that far) to print out our show tickets but naturally the weather complicated things. Thankfully I was able to get the front desk to help me print and then the weather settled down by the time we left for the show before 01:00pm.

Then stupidly I had asked my brother to bring my little baggie of almonds as I wasn't sure when we'd be able to eat while we were out and whether or not we could find something keto friendly. This was noted during the bag check before entering the theater area and we were asked to either eat them or dispose of them before going in, and so I ended up trying to wolf down a bag of almonds without water fairly quickly. That also meant my initial plan of holding onto the nuts for later snacking was foiled and thus I had to get through with the front-loaded energy from a cup of coffee, a stick of cheese and those almonds. That wasn't much.

But beyond all that the show was amazing and I super appreciated the talent that had been gathered for the production. Lance Bordelon has an amazing set of pipes and he could totally belt it out when the song demanded it. Opposite him Jos N. Banks was a great Lola and clearly had a lot of fun with the role given all the embellishments for various lines that really set a distinct spin on the character. Sydney Patrick was a rockingly perfect Lauren and I loved how she handled "The History of Wrong Guys".

And when it comes to definitely more expensive touring shows like this, the set production was totally worth the ticket price given the many moving pieces and of course the big finale piece that was mesmerizing in terms of the well-timed lighting and that multi-configuration stage to boot. Gah I loved it all so much and I wish that Tobie had gotten a chance to see this particular production with me. Alas the show's Singapore run is pretty short at barely 10 days. It just goes to show that Tobie and I really need to map out more travel together. 2019 is definitely going to be the year for that.
all the world's a stage cultural victory keto life run the world