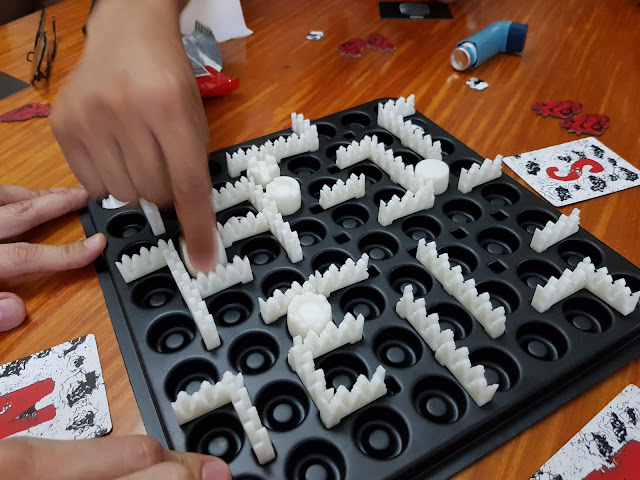 A month ago I said that I'd write about our weekend gaming on a weekly basis as a sort of regular column on this blog. Then I somehow completely forgot about it and was distracted by my efforts to get fully onboard the ketogenic diet. Oh well.

But this weekend we picked up two games of particular interest that really impressed us, so much so that we immediately presented them as a game option during our game night later the same day that we had bought them.

First there's Nyctophobia, which is a horror board game that Tobie had been excited to pick up. As the game is named after the fear of the dark, suitably it involves "darkness" as a primary game mechanic. In this game there is one Hunter (think serial killer) and several Hunted (victims) trying to make their way through a forest. Salvation lies in finding the car that will allow the Hunted to call for help before it's too late. The main catch is that the Hunted players are all wearing black out glasses to simulate being blind while the Hunter is not so encumbered.

The game was created by Catherine Stippel, who was inspired to come up with the game while trying to find things to play with her blind uncle. The end result is a very scary game experience that has players feeling their way around the woods in relative darkness with the Hunter taunting them as he moves around the board. And the taunting isn't even optional as the Hunter's actions are dictated by cards that include a verbal component such as "Tell 2 truths" or "Taunt the closest player". It goes a long way towards creating a true sense of thematic horror in the game.

Then there's Lowlands, which admitted I wanted to get primarily because of how it was described in Shut Up and Sit Down's review of the game. I love a good strategy game that really presents a challenge in terms of figuring out how to find a winning strategy. The game was a bit more complicated to learn than what I had gleaned from the video but it the manual was actually pretty comprehensive in how it explained the game in a clear, effective manner.

But when we actually sat down to play the game, we were blown away by the ingenious yet also insidious balance in the game mechanics that really made the game shine. The goals of building the dike to block potential flooding is oddly in contrast to focusing on growing sheep and playing the two primary directions for the game can get a little mind-boggling. Through in a tricky resource system, a random mix of diverse upgrades and limiting players to only 3 actions per turn was just genius. I had never been so happy to lose a game during the first try as it only emphasized how clever the game really is.

And it's all about sheep.

The tabletop gaming hobby is one that will always rely on the brilliance of the ideas driving innovation. Yes, video games also require a certain amount of creativity to push things along but a lot of times the technological medium limits the forms of expression for the industry and a lot of games are remembered for graphics or other technology-based touchpoints. But tabletop games don't have the advantage of technology most of the time and have to focus on remarkable ideas for gameplay or story to help set their games apart. And that particular direction for innovation results in some amazing games that you'll never see in a video game.
gaming GeekyGayming tabletop gaming