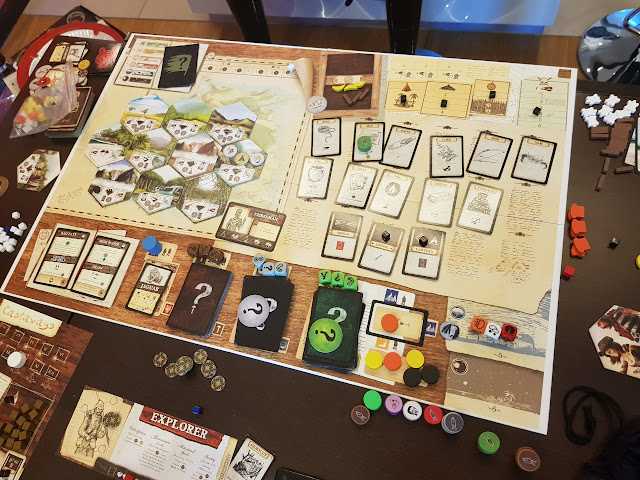 For last night's FGTC board game session we didn't have as much time to game this time around so we focused on bringing a mix of newer games recently added to our collection like The Village, Photosynthesis, and Dice Forge but also an old classic in the form of Robinson Crusoe: Adventures on the Cursed Island.

It's funny how we really love this game but don't get to play it as often as we'd like to as it is a pretty tricky game that is estimated to have about a 33% win rate. In another coincidence, I can literally see the spot where our copy of Robinson Crusoe sits on the shelves from my default position while at my computer at home at the Sietch and so it's like it has been taunting me for some time.

More than just us liking game is the fact that I had ordered a bunch of mini-expansions and upgrades for the game some time back but we had never gotten around to actually exploring them. And so last night's game session was the first time we had deliberately made an effort to play it. It was a bit of a near miss as we don't get to play every single game that we bring given how time works when you're having fun, but we still managed to squeeze in a game just as the sun was rising.

It was the classic "Castaways" scenario but we had thrown in some of the quirkier upgrades for the game like wooden components that actually look like what they represent and helpful stickers to better mark all the wooden pawns so they're not just a generic multi-colored mess. And in the end we managed to escape the island without anyone dying and it was a nice end to the night.

As far as cooperative games go it's definitely one of the most thematic ones that manages to set up a bit of a story as the game progresses. The mix of the event cards and the adventure cards work so well together to create a unique game experience every time. It's the same core game experience that was used to developed First Martians, but admittedly that game feels a little challenged in the story department - not counting just how hard it has been to just figure out how to play it.

I'm just glad that we got to play it again and it certainly made the game session just as fun as despite it being a wee bit shorter than past nights. We really need to play this game more often.
gaming tabletop gaming