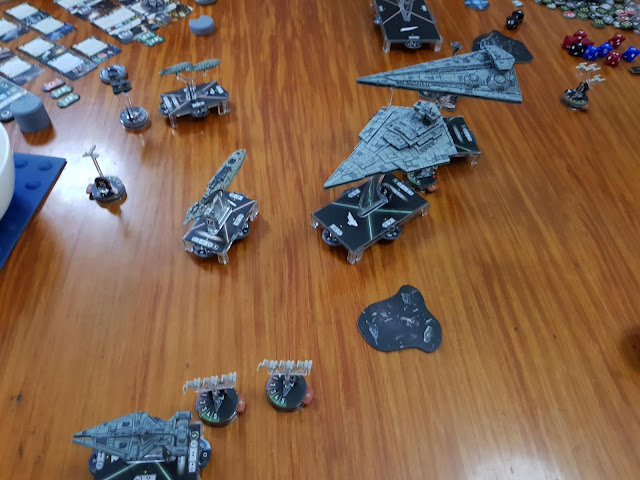 So I finally hunkered down to develop initial fleets for both Rebellion and Imperial factions for Star Wars: Armada so that Tobie and I could play a proper game beyond our first attempt with just the core set. That was just a tutorial game to get a feel for the rules and today's game is the first time we're playing with expansion ships and the full rules of the game including upgrades and other special abilities.

The game remains unfinished since these game really so take a lot of time to resolve plus we had to step out for a play. Then we'll have to pass by the Sietch to get our board games for tonight's FGTC board game session. It's a really tight schedule.

Outside of all that, I'm really enjoying the game and I'm admittedly surprised at how much I'm enjoying a war game. I suppose it helps that I'm so invested in the supporting Star Wars fiction to begin with so that is adding a whole additional level of enjoyment. And that is why this game is clicking with me more than the likes of Warhammer or other tabletop war games.

I wonder if this might ever lead to me trying out the different Battletech tabletop games while we're at it. But on be thing at a time - my wallet can only handle so many hobbies at once.
gaming Star Wars tabletop gaming