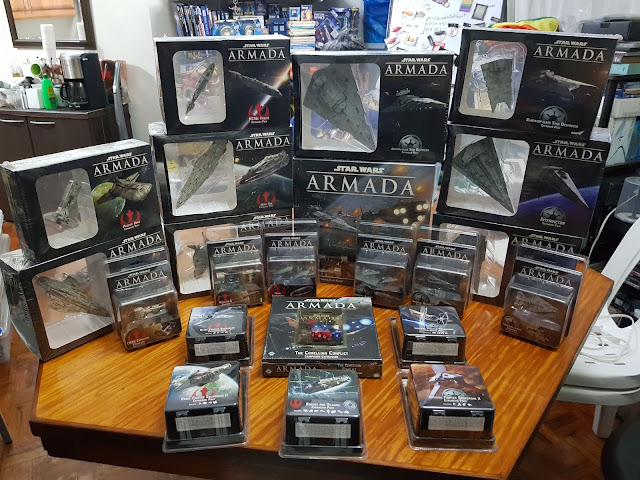 So a sort of out-of-topic sale post in one of our tabletop groups revealed a most surprising offer - a nearly complete set of Star Wars: Armada ships and expansion packs. Now I've done my best to stay out of the tactical miniatures game market despite the lure of related games like the X-Wing Miniatures Game or Star Trek Attack Wing because of the costs, the storage requirements and all that good stuff.

Where X-Wing focuses on smaller dogfights and related engagements, Armada is more of a fleet tactics game that that has two players play the role of admirals of different fleets facing off. And that means a bigger focus on larger capital ships and those are just beautiful. They're a nice plastic counterpart to my ridiculous Eaglemoss Star Trek Starships collection with a heck of a lot of detail and the bonus of a game system on top of everything.

Typically players invest in either the Imperial or Rebellion sides for cost purposes and go from there. By taking this deal (which was for practically half the retail value of the collection), I now seem committed to developing both factions more or less equally.

But of course I lean Imperial in terms of preferred ship design.

I have no idea if this will even become of the games we'll play regularly since it's limited to two players and it can run a little long. But I'm still going to try to learn the rules anyway and see where things go.