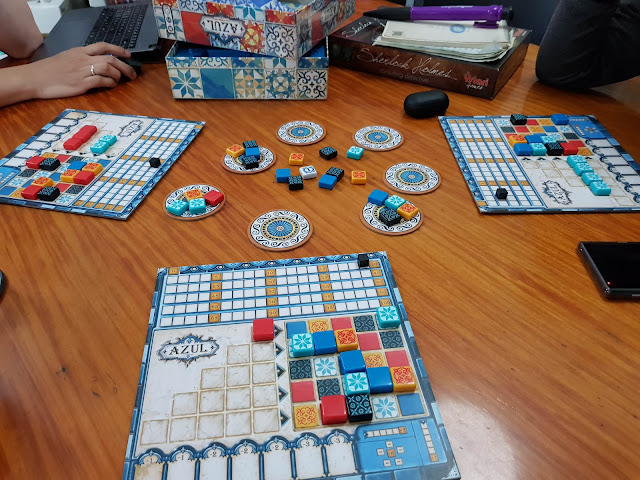 NOTE: So I'm trying something new by more or less dedicating my Monday blogs here to talk about the games we played over the weekend. I'm writing about this here on my personal blog so it can be more about experiences and not necessarily the technical aspects of the game, which is something I'd more likely cover on the Geeky Guide as part of a review. Ultimately, this is me essentially "workshopping" this content to see if this something I should focus on more.

This weekend we had two separate board game sessions with just me and Tobie playing games in-between. Here are the big highlights? I don't know what I want to call this.

The game I can't stop thinking about now is Sherlock Holmes: Consulting Detective, which is a game that originally came out in 1981 of which Tobie managed to secure a copy of the 2014 edition secondhand. The game is sort of like an escape room experience (think the EXIT games) where you are given a case book and a fake newspaper from the time period and a map of London and with these elements it's up to the player investigators to figure out the answers to the case.

Tobie and I had failed miserably at the first case file and got out with limited points, which I suppose was still better than scoring negative points as many folks had. I was super eager to dive into the next case but his outing happened and so I was left alone to my own devices for a few nights, thus unable to play the game without him. We finally tackled the second case once he was back (albeit lacking sleep), and had to break up that game session into two since he got too tired. But this time around we figure out the answer to the case correctly even if we didn't beat Sherlock's score of 100 points. But hey, at least we were right this time!

Azul has become the new easy game to slide into sessions as it's quick to teach and it's quite pretty. We played Azul both with my brother and some other friends in a separate session both for the first time and I think that went pretty well. I love the game and I'm getting a lot better at it but victory is never guaranteed.

Sunday was notable for this month's campaign session of Seafall and things haven't been going all that well for me. After winning like the first two games, Tobie has managed to win every other campaign session since then and it's beginning to get to me. But that hasn't taken away from the fun - it just gives me a definite goal post of sorts to aim for. And I'm really keen to expand the game's lore more than anything else, which means I get a little distracted by efforts to Explore islands or find new islands, all of which may not necessarily give me the most Glory points. This method isn't helping me win, but I am enjoying the campaign significantly while clinging to second place behind Tobie. 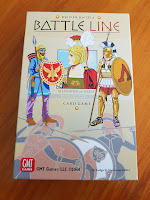 Tobie's second hand game shopping has been steadily growing our collection on the cheap and his recent acquisitions have been rather quirky. He just picked up a copy of Battle Line while we were eating and that turned out to be a cute, fun 2-player tactics game. Aside: that inspired me to dig up our copy of Mouse Guard: Swords and Strongholds so that I could learn how to play it as only Tobie had played it before.

The other quirky purchase as of late was The Village and we still had enough time after Seafall to play it for the first time. It was a rather satisfying experience that first looked like a worker placement game but it really was a cube-taking game? It's hard to explain but needless to say we all enjoyed the challenge even though it wasn't clear who was winning at any point in the game plus trying to kill your family members was such a key part of the game. And how many games are like that? I know we're going to want the expansions sooner or later, assuming we can find them. But for now we need to get more games in and better appreciate the strategies at work.

So that was the weekend, more or less. I think it went on longer than expected since it was the first time to talk about some of these insights and I still feel there's more to be said about Consulting Detective. Catch you again next week!
gaming GeekyGayming sietch life tabletop gaming Tobie