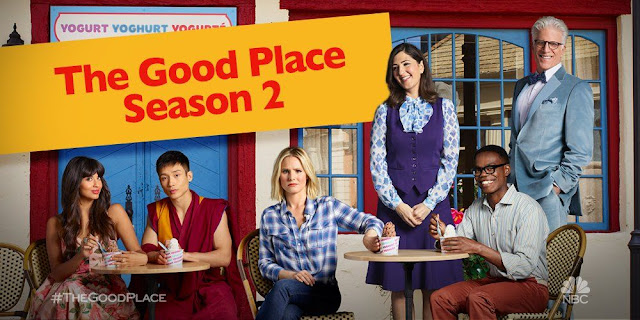 So we're blitzing through the second of The Good Place on iflix because it is an AMAZINGLY good show that is beautifully written and surprisingly witty and intelligent. But it shouldn't be a surprise given this show is the brainchild of Michael Schur, the same guy who helped spawn the US version of The Office and the equally brilliant Parks and Recreation.

But this show is totally different since it moved away from the mockumentary format that helped kick off The Office and it went in a completely different direction. It has an initial cast roster that sounds like a bar joke but it quickly evolves into something crazily funny in a very unexpected way. And I can't get over it.

Janet is one of my favorite characters. She could have just been a running gag sort of character being the pseudo android but she ended up being so much more. I want to rave about her more but then that would mean spoilers nd a lot of what makes the show work are those reveals.
television