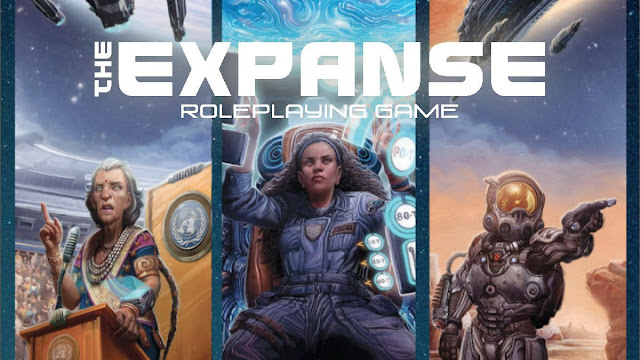 So I decided to back the Kickstarter for The Expanse Roleplaying Game after much consideration. I made the decision within the last 5 days of the Kickstarter because I really wasn't sure if this was something that I wanted to get into but hey options, right?

In terms of RPGs that I can run, I seem to have a growing affinity for games based on existing IPs. I've already demonstrated a passion for the Doctor Who RPG and I'm written about being open to learning the Star Trek Adventures RPG as well. And now we have The Expanse as my next project even though I've only watched the show but haven't gotten into the books just yet. But they're in queue, I promise!

Oddly, this begs the question of why I haven't bothered to try getting into the Star Wars RPG systems just yet and I don't have a good answer for you just yet. Maybe it's because the custom dice annoy me too much. Or maybe my love for Star Wars lore makes it harder for me to think about telling original stories in this universe?

Not that I know how I'd go about a game in the universe of The Expanse just yet. There's a very strong story that drives the books and the TV show and I'm not quite sure how to dance around that or where to squeeze in original stories.  I'm sure the system book will include explanations of the setting, where stories can go and will also provide possible story pegs for new GMs.

In the whole it's a lot of potentially exciting stuff. I really need to read the books soon.