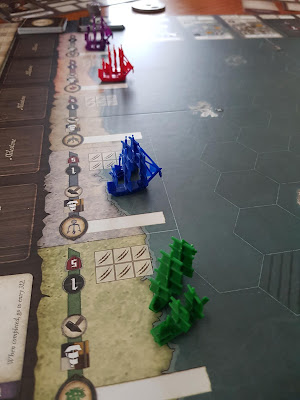 Last night was rather bonkers as is often the case for a Saturday night at O bar. We had gone because a Japan-based friend of ours was in town for the weekend and he had hoped to hang out. And thus we made adjustments to the gaming schedule to accommodate him.

And that was quite a feat given what we had been busy with before. After work on Friday night we had a 7th Sea RPG session that ended shortly before sunrise. Saturday we had Tobie's panel and books launch at the Romance Convention followed by our Pendragon RPG session. And then we still went to O Bar.

We left O Bar past 05:00am with half a bottle of Bacardi Gold in tow. We couldn't finish it given the limited friends who were present last night not counting the the beers that came with the entrance fee and the many, many shots of tequila that had come our way from different friends.

Today has been a lot more relaxed in comparison as we just had some friends over for board games. The bulk of the day was dedicated to our ongoing Seafall campaign, which is still proving to be quite intriguing 4 sessions in. I just wish I were winning more as Tobie has won most of the recent sessions despite my best efforts. Before today we were tied in terms of the overall campaign score but today's game ended with him earning a bigger lead.