02673: Hobbling Through The Weeekend

July 01, 2018
So despite my bum foot we still managed to go to O Bar for their 8th annual Pride Party and it was a lot of fun, as always. While I will always wish that more friends would join us for these sorts of events, I was still more than happy to still see a good number of familiar faces despite the insane crowd at the event. And most importantly we shared a table with good friends who have stuck with us through the years and happen to share a love for the fabulous performances of the O Divas, clearly Asia's finest drag queens.

The show was pretty epic, as is always the case for these big event nights. As much as I feel the O Divas deliver a spectacular performance each and every night, something happens during these special events that shows that they can still turn things up to 11 as they push themselves harder and harder. Plus they were joined by many other talented local artists of various disciplines, making the Pride Party performance something truly unique.

I stayed seated for most of the night in order to avoid aggravating my still recovering foot and still managed to have a good time. But by the end of the night I was back on my feet wanting to at least feel like I danced a bit even if it maint not using my legs all that much. Good times and more great memories with awesome friends indeed. 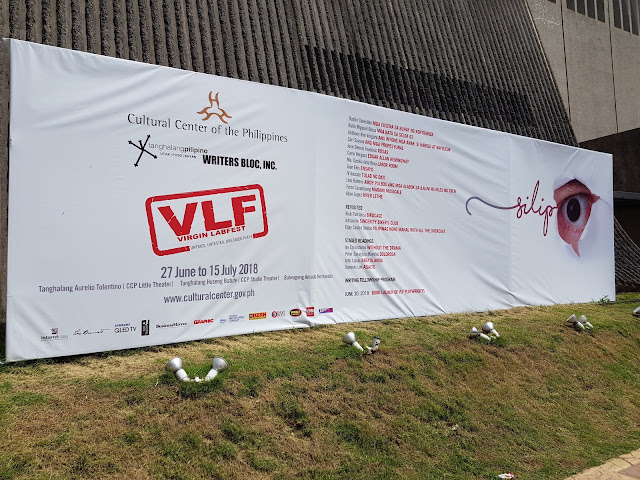 Despite the fatigue from last night's partying and feeling a tad hungover, we managed to get ourselves to the CCP this afternoon for this year's Virgin LabFest. We set time to watch the Set B plays as our friend Carlo Vergara had written the last play in the set, Edgar Allan Hemmingway. VLF is always such an interesting theatrical festival as it really brings out some interesting ideas and approaches to storytelling. Plus you get a lot of talent involved in the plays.

I'll write a proper review for the set soon enough, but on the whole we definitely enjoyed ourselves. The second play, Ang Mga Propesyunal was quite striking with its obvious efforts to provide commentary on current events but done in a manner that was striking and somewhat creepy as all the characters were portrayed by childre despite the rather adult dialog. And finally Carl's play was as a surprising take on the struggles of writing that showcased his ability to write clever dialog while still presenting an intriguing narrative.

Perhaps more importantly we also got to spend time with him after the play which resulted in a decent lunch/dinner at Max's (complete with unusual stuffed toy as part of the meal) and a lot of interesting conversation. We moved to Iceberg's for dessert and even more talking before it was time to trek home to BGC to wrap things up.

My foot injury somewhat limited what we couldn accomplish for this weekend but on the whole I think it was time very well spent. Now to get ready for another work week and all that our jobs demand of us. I'm just glad that I can more or less walk normally again.
all the world's a stage cultural victory health O Bar queer life