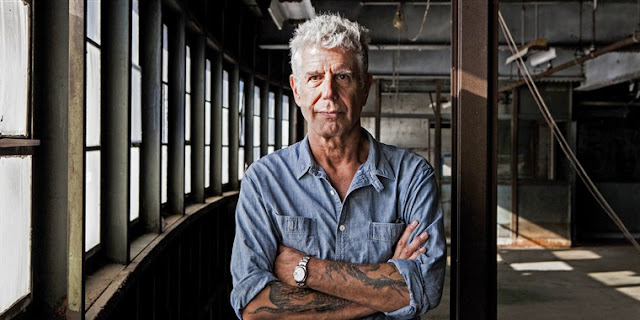 He was in France shooting another episode of his CNN series Parts Unknown when he was discovered unsconsious in his hotel room. It has been revealed that it was a suicide but more precise details have not been shared with the public. The world grieves his passing.

I loved Anthony Bourdain as well and have written a few posts about him in recent years because of how much I've enjoyed his work. But it's funny that my notion of "his work" is actually more about his travel shows and his books rather than his "cooking" per se. We all call him a celebrity chef because technically he is a celebrity and he has worked as a chef but his fame wasn't because of his cooking alone. We all came to know him more because of his no-holds barred book Kitchen Confidential and how it gave us a very honest look at the restaurant industry. This was followed by other books including Medium Raw and other essay collections like A Cook's Tour (tied to the TV series) and The Nasty Bits.

More folks will recognize him for his television work and his rather steady, measured way of speaking that is part storyteller, part drinking buddy.  He hosted many shows including A Cook's Tour, No Reservations, The Layover and finally Parts Unknown. He was the narrator and executive producer for PBS's The Mind of a Chef from 2012-2016.

The man was an inspiration because of his achievements, but more because of who he was. He was a man who learned to emrbace foreign cultures with open arms and was more than willing to experience a country through its food. He loved bold flavors and would travel far and wide to eat a good meal in the most humble of settings. More than that, he knew that to appreciatea culture one needed to embrace their people and understand their struggles and his recent TV efforts exposed him to some of the harshest of conditions that people are subject to.

Anthony Bourdain was amazing because of how he wore his humanity on his sleeve and how he had long since cast off all pretensions. He was all about openness and honest and more people could embrace that sort of philosophy to help us allmbe better humans to one another. We could all be kinder and more considerate of others and always willing to share a meal together.