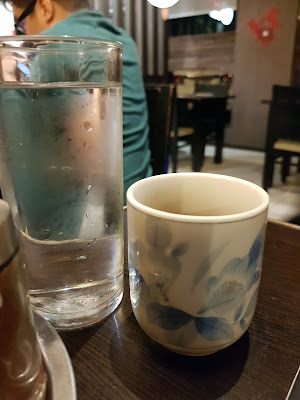 For about two months now I've been tweeting a #DrinkDrankDrunk count as a daily threaded update. As my regular yoga video regularly reminds me that drinking lots of water is important to the overall weight loss process, it felt like a good thing to be more mindful of for general health.

Over the course of my tracking efforts I did note that initially my water intake was worefully inadequate. I was getting through the day with equal parts water and coffee and that rather concerned me. Since then I've been making a more conscious effort to up my water intake.

The summer has only encouraged this and more water is a good thing given the heat we've been experiencing in recent weeks. It is often tempting to resort to soda and other such drinks, but that would defeat the purpose of this whole exercise.

There's nothing like observation to really influence behavior. On the whole I think that I'm doing better but it still helps to push me along. I'm waiting for it to become a full-on regular habit that won't need prompting by external forces like this.

I still need to stick to more water though. I've been limiting myself to no more than two mugs of coffee a day and on some days I actually go entirely without, which could be a good thing. It's still important to juggle the need to balance water and I try to supplement any caffeine with additional water to help level things out. It's not a perfect approach but it's better than nothing, right?
health sietch life