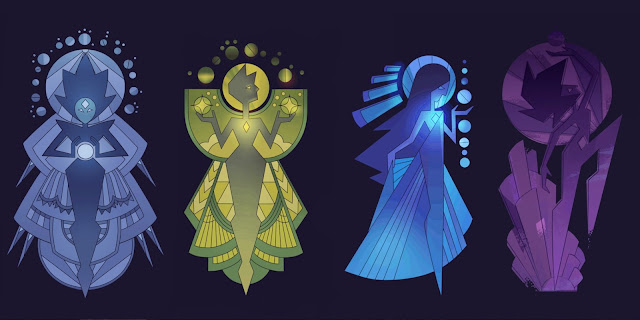 Steven Universe as a show has had some great reveals that have drastically changed our view of the show in one way or another. One of the earliest ones was the reveal that Garnet is actually a fusion of two gems - these being Ruby and Sapphire. As fully revealed in the S01E52, so many different hints about Garnet's true form came to fruition after a heck of a lot of speculation and theorizing within the fandom. And that was a great moment in the show that really set in stone what this show was going to be like.

One of the central mysteries of the show has bene about the Rose Quartz, mother of titular character Steven Universe. We've only seen bits and pieces of her through flashbacks and stories told by other cahracters as Steven himself was never able to meet her given the unique circumstances of his "birth". And thus the questions related to this have fueled a lot of fan videos all across the internet.

Another big mystery has been about the Diamonds, the bigwigs in gem society. Thus far we have only met Yellow and Blue Diamond and it has been established that Rose Quartz had shattered Pink Diamond. White Diamond has not been directly seen in the show beyond her hand firing an energy beam at Earth.

"A Single Pale Rose" shatters a lot of other ideas and establishes that Rose Quartz is actually Pink Diamond. She had setup an elaborate plan to have (her) Pearl shapeshift into Rose Quartz in order to fake her death and leave her free to start a new life as Rose. This one reveal makes sense and many clues have pointed to this possibility across the seasons but naturally fans are divided. I've watched a few videos and some have described this as making Rose a villain if not THE villain of the series given all the negative implications of her actions.

But personally, I love this revelation and I appreciate the complex stories that are naturally going to follow from this episode. It resolves part of Steven's struggle with trying to accept his mother would be the sort of person to shatter a diamond but now he has to deal with her being a diamond in the first place. There is so much rich character narrative out there for the Crewniverse to explore.

This nicely adds a lot more depth to Pearl's character more than just an unrequited love angle. Sure, you can be negative and think that her love for Rose wasn't real as it was programmed into her being her pearl. But on the flip side you can also see how Pearl's devotion grew into a deep affection as this time she was free to choose to follow and love Rose or not once the rebellion was in full swing. Living with all these secrets must have been agonizing.

This also opens the door for a way to deal with the Diamonds in a manner that many not have to end with a big confrontation of Steven versus White Diamond or something. It's too early to tell how things will resolve, but I'd like to think Steven will find a way to stay true to himself and his positive outlook on life and find a way to have all parties satisfied somehow. Just not sure if the Diamonds will first try to have Pink Diamond reassert herself instead of Steven. The possibilities are limitless.

Of course there are even more questions like why did Garnet (or at least Sapphire) never see possible futures that involved Pink Diamond's plans to become Rose or where all her plans just a form of escape from the responsibililties of gem life or did she really grow to love life on Earth and become the rebel leader she first pretended to be? And we'll have to wait for  future episodes to fill in the blanks and flesh out the story even more. And that'll be a fun journey.
inner ramblings Steven Universe television