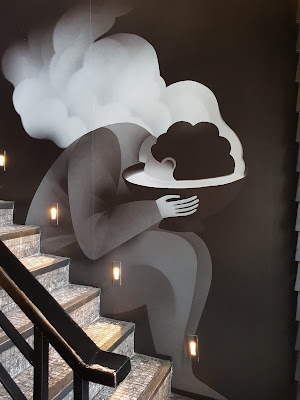 So I guess it was more that just typical post-travel weariness. I'm feeling somewhat under the weather and for now I'm trying to manage things with significant amounts of water and the occasional boost of paracetamol. My joints hurt and I've been feeling a little feverish here and there and that's been quite the annoyance. I fully accepted that something was wrong during last night's Pendragon game as I had to tap out early in order to get some rest. Thankfully we got through the major plot points that Tobie wanted to hit despite my need to lie down.

So far keeping hydrated naturally helps. Oddly enough I also find some solace from hot soup as evidenced by the last boost of energy I got from some instant chicken soup that I had during the tailend of the game. It was enough to see me through to the end of the night's story despite how bleh I had been feeling right before that. But yeah, still something to keep watch on.

It's the sort of unwell feeling that is enough to slow you down and make you feel like you don't want to move but not quite enough to justify not going to work or doing chores. I hope I feel better by tomorrow as there's a lot of stuff that needs to get done both at work and at home. Plus no one ever wants to feel sick, especially given the summer heat.