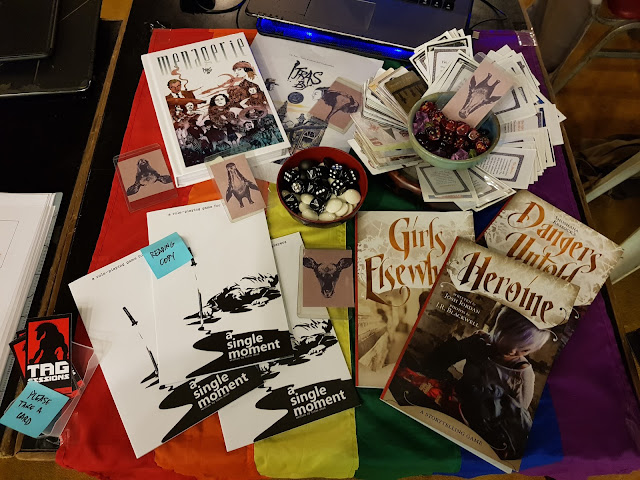 Today I accompanied Tobie to (AUTHOR)ities: The 9th Philippine Literary Festival. It was a rather unexpected that he and other game designers had been invited to showcase their creations but everyone was appreciative of the opportunity. I couldn't get out of work for the first day so he had to rough it alone. But given his duties for the day also included moderating two panels, I figured that the one day I could provide the most help would be today.

Tobie said today's crowds weren't as busy as yesterday's but we still got to meet a few interesting people . What was a treat was seeing everyone crowding the booth of Tadhana: A Filipino Tabletop RPG as we've been supporting their efforts for some time now. So it's nice to see growing interest in a local RPG.

Apart from manning the booth, I also got to chat with other game creators and even tried out the beta version of a new Lastikman card game. The main downside was the lack of decent mobile data signal inside the CCP, which was probably due to the density of the structure and the sheer number of mobile phone jammers installed in the various theaters. At least it was a good opportunity to get more reading in.
books gaming tabletop gaming Tobie