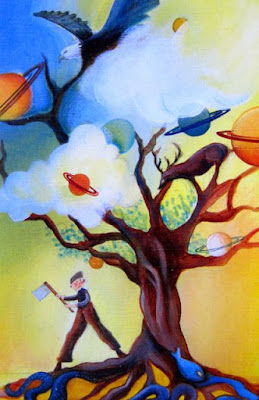 On the day that Milton was born his mother planted the seed given to her by her mother. She wasn't sure why it had been so important but her mother made her promise that she would plant the somewhat large but generally unremarkable black seed.

So as Milton got older, the tree grew taller. But the tree grew faster than any other tree and quickly outpaced Milton in order to tower above him. The tree eventually became his favorite place to play for some reason even though it wasn't immediately clear what sort of tree it was supposed to be.

And things were pretty much Normal for young Milton until the tree began to develop its own astronomical features.

It started with a small rock that appeared to hover in the air one day. In time it turned out to be some sort of micro-asteroid that had been caught in the tree's gravitational pull. While other kids played around trees and attached tire swings, Milton found himself observing the formation of gas giants and stray bits of this and that getting pulled towards the threes increasing satellites to form rings and other bits. As the number of planets grew, the tree began to lose its leaves and seemed to be relying on some other cosmic force to stay alive.

As Milton grew older he found that he couldn't be away from the tree for very long - as if the tree had some hold on him just like it did its many planets. Yes he could go to school and he could hang out with friends but sooner or later he'd need to go home and stand under its shade while avoiding rogue planetoids joining the tree's orbital paths.

People didn't bother to ask why that one tree had such unusual features in the way that people try not to make a fuss in pretty little communities like the one where Milton and his family lived. It wasn't doing any harm after all and it did make for an interesting conversation piece during meetings of the homeowner's association. But people did find it odd to see Milton standing by the tree every day single day.

To help you understand, the pull of the tree on Milton initially felt like an odd discomfort. But the longer he'd stay away, the more the discomfort turned into an itching and eventually a gnawing and finally increasing amounts of pain. The tree needed Milton and it made sure that he knew it. As more and more planets formed around it and started to create an unusual shift in the atmosphere around it that made things feel weird around the tree at times. The tree was resolute in its nature. If only people could determine what exactly its nature was supposed to be.

And as much as Milton's mother assured him that there was some purpose to all this and the tree would perhaps turn out to be a gift to him, the suffocating debt seemingly imposed by this tree weighed heavily on him day after day after day. The tree had never given any indication as to why it existed or why it was bonded to him. All he knew was that he couldn't escape it. All his young mind could process was that the tree was holding him back.

And one day he decided he wanted to be free.
writing