0261B: About Deck Building Games 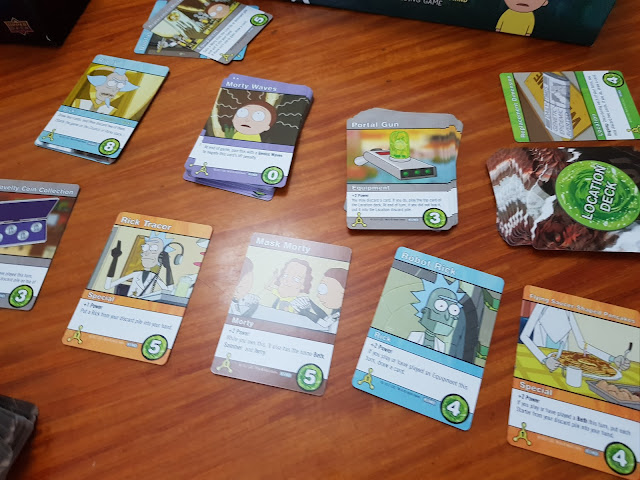 So I've seriously fallen in love with deck building games. For the unfamiliar, deck building games are those that revolve around the notion of players adding cards to their decks during the game itself instead of purchasing cards ahead of time like in collectible card games. My history as a Magic: the Gathering player probably played a big factor in how much I've grown to love the game genre as it's a way to still play a fun card game without the need to spend just to build the deck you want. And while the mounting costs of our many deck building games and their expansions, it still feels like a more manageable expense than chasing after rare cards in boost packs filled with a random assortment of cards.

Over the years we've played a good number of deck building games but hardly all of them. We have fallen in love with the Legendary family of games specifically. Their straightforward approach to things combined with popular franchises like Marvel comics and the Alien movies has made the games a lot more enjoyable. Their system is similar to what we've experience with other games like Ascension that follow the same fundamental system of having basic cards that allow you either buy new cards for your deck or cards that allow you to attack enemies.

We recently got to play the Rick and Morty deck building game which uses the Cryptozoic's Cerberus Engine of games that was also used by the DC game. I was rather disappointed with this spin on the genre as it only uses a single "currency" for purchasing cards and defeating enemies. The narrative breaks in the DC game since you can have Superman living in the Batcave using a Green Lantern Ring to defeat Darkseid since it's all about just gathering as much power as you can in one turn. But the same system when applied to the Rick and Morty episode all about a world full of infinite Ricks and Mortys suddenly works a lot better.

Clank! is one spin on the deck building genre that has been rather refreshing. Apart from the usual need for cards that generate points for buying cards and points for attacking enemies, there's also a new resource of sorts - movement points. Instead of facing cards being revealed one at a time from a random draw from the deck, this game added a dungeon crawling element to things which has turned out to be pretty fun. It hasn't unseated Legendary as our favorite deck building game but it's definitely fun to play a lot.

Smash Up! is tangentially related as it's a shuffle building game as it calls itself as it provides set faction relate decks, two of which that you mix to create your own deck. But I'll save that for another discussion.
gaming tabletop gaming