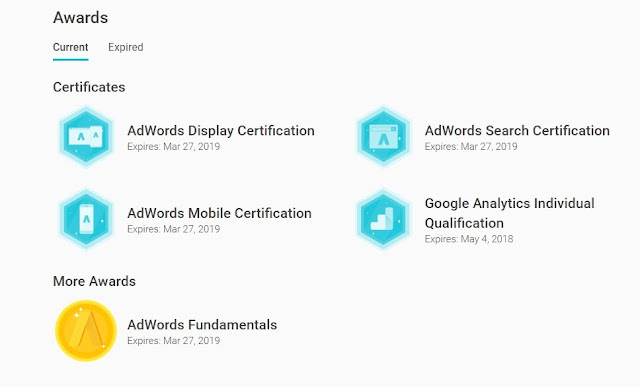 So it's that time of the year when my Google AdWords certifications expire and so I spent a better part of the day taking one test after the other. That was a total of four assessments starting with the Fundamentals course to three specialization courses to fully qualify. Even though I've been taking these tests every year for three years now, it can still get rather tiring and tedious. And there's always the one or two tweaks to the system that sort of shifts things around and changes the rules here and there.

I really should spend more time exploring the new Academy for Ads site they've setup as their new certification center. Before the exams were hosted on the Google Partners site but they moved it all here in order to streamline things or something. They've also added a lot more courses, which seem like a nice way to prepare. I do plan on revisting the courses between my other work tasks - for today I just had to rush the assessments since my certification had lapsed over the weekend. We haven't allow that to stay that way for long.

And as much as this is a work-related thing, I still feel rather geekily happy to have this knowledge as part of my bag of tricks.
work