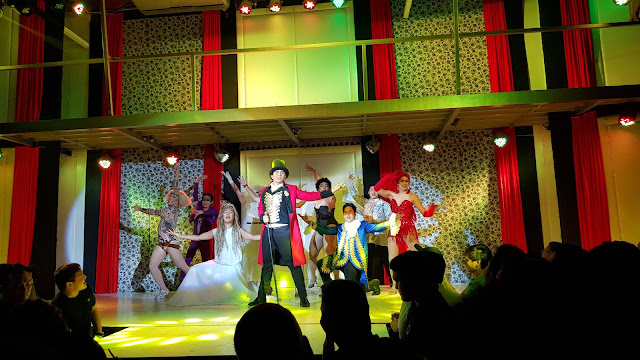 Last night was the special O Bar summer kick-off night that also included a special set dedicated to The Greatest Showman. Saturday nights are the busiest at the bar and the nights that draw the most people but they're also when O Bar typically has theme nights and special events as well. And big O Bar event night is typically enough to get me and Tobie to brave the crowds.

Beyond just wanting to see a good show though, our continued support and dedication to O Bar is also our way to recognize all the hard work that the O Divas and O Boys of O Bar put into these shows every night. Even just their regular shows take a lot of work and big theme nights are even harder. This tribute to the movie was especially difficult in terms of sourcing costumes for everyone, getting the make-up right and chreographing the different numbers to somehow reference/echo the source material. Most bars can maybe pay homage to a song or two as individual pieces and then call it a day. But to essentially go through the entire movie musical through its performances is bonkers.

If you love drag queens or musical theater, I cannot stress enough that you need to watch the shows at O Bar. These are full-on productions that are made with a lot of love but tempered with a lot of hard work, effort, and a heck of a lot of rehearsal time in order to get things just right. I know Metro Manila has a good number of talented and creative drag queens out there, but O Bar approaches drag like one would approach theater and this continues to set them apart on an entirely different level. No one member of the team is necesarily more important than the other and you can see how hard they work whether they're performing a solo number or they're a member of the backup retinue for another number.

Tobie and I love the O Divas and the rest of the team that strivews to deliver a special entertainment experience every time. They're an amazingly talented group of people and that makes supporting them even easier. And I just wanted to take a moment to recognize how much time and effort it takes to keep these shows going. I have a strong feeling that not enough bar patrons realize this fact.
inner ramblings O Bar