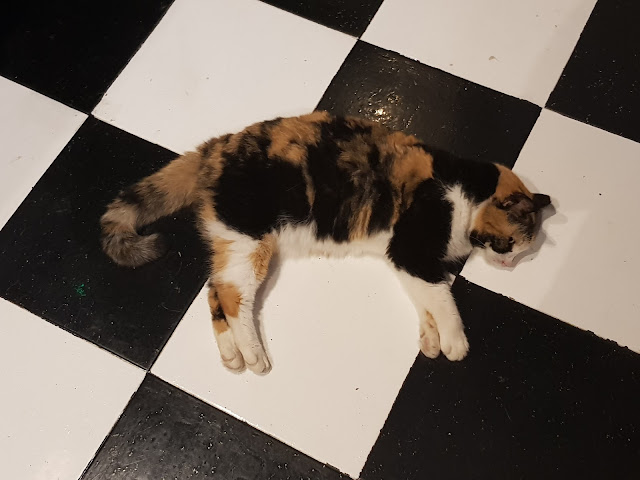 My Monday was off to a weird start. Woke up way too early so I went back to sleep then woke up much later than planned. Didn't have time for yoga so just had to get ready and get out. Work was reports and a lot follow-ups both internally and on the client side. Just one of those days.

I've mostly migrated to the new computer, which isn't saying much since it's more like I've deleted most stuff off of the older laptop apart from my video files. The new computer doesn't have a DVD drive (as is the style these days), so that has become a rather compelling reason to limit downloading to the older computer since it can still burn media to its drive. There are of course external DVD burners that I can still use with the new computer or the serious consideration for getting a NAS device for the Sietch as opposed to burning.

The night ended well with a repeat dinner at Byblos grill since (1) we enjoyed ourselves a lot the first time and (2) we wanted to share the fun with others. We ordered up a small storm and went home happily full.

Other fun moments from the day include my first visit to Liang Court, which is a apparently a mall with a LOT of Japanese establishments and stalls. It's also home to the Meidi-Ya supermarket, which also has an awesome array of Japanese food that you can purchase as lunch. Everything from sushi, sashimi, rice bowls and bento sets. It's amazing and it's not sad supermarket Japanese food like what you get at SM Supermarket. It's also home to another branch of Books Kinokuniya, one that is home to a special Bargain Alley section for discount books. I was tempted to pick up some graphic novels, but I already spend too much on digital comics via comiXology so I thought it best to hold back.

I did get new Studio Ghibli things though.