02596: Because Mental Health Is Complicated 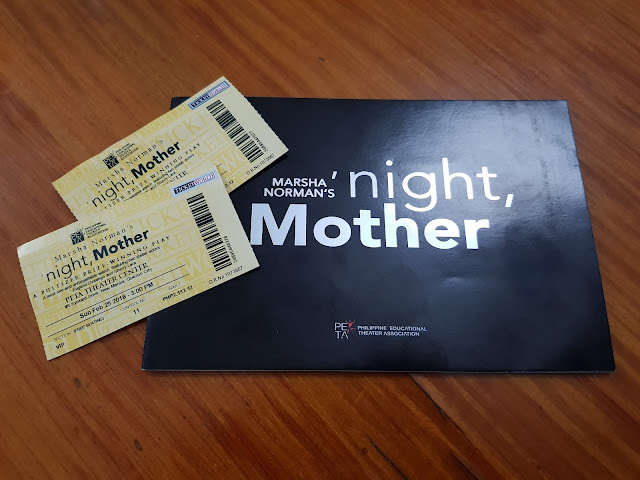 Today we watched PETA's staging of Marha Norman's 'night, Mother, which is a rather complex and heavy-hitting play starring Eugene Domingo and Sherry Lara. The premise of the play is that Jessie (Domingo), who has been living wither mother Thelma (Lara) for years informs her that she plans to take her life before the night is over. What follows is Thelma's desperate attempts to understand why her daughter feels this way and to hopefully find a way to convince her not to push through with her plan. So yeah, it's pretty heavy but it was very well done.

The play ended with a quick debrief session with the director and a few mental health experts / professionals from partner organizations that had helped the PETA team work on the play and it was quite the interesting discussion. They also had flyers from these differernt support groups and wellness centers all dedicated to supporting mental health concerns - I uploaded them on both Facebook and Twitter for reference. I think prior to this event I had only heard of the HOPELINE from the Natasha Goulbourn Foundation but was surprised to find out there were other groups - with ones like In Touch Community Services dating back to 1980, apparently.

Mental health concerns are always quite...complicated, to say the least. There are so many differet possible concerns out there, many of them not quite clearly fitting in this or that category, further complicating the diagnosis process. Throw a stone into a crowd of people and chances are pretty high that you're going to hit someone struggling with some sort of a mental health concern.

Social media gives a face to a lot of this darkness that people struggle with as we often see various platforms being used as outlets. There's no clear cut manual on how to deal with these outbursts and exclamations. Sometimes it feels safer to just leave them alone in order to avoid complicating things further. But then a lot of times you'll want to find a way to help out...but good intentions aren't enough in these situations. But we try. And a lot of times it can feel like we fail since naturally undergoing such st ruggles tend to be pretty stuck in their dark places and (whether consciously or not) tend to resist being dragged out of them.

The consensus is that people struggling with things like depression need to be able to talk to people in order to help process things, hopefully make sense of these things. But often times these same people can instinctively pull back from others and not want to talk to anyone. So it's a bit of a pickle given they need help but also need to be open to gettng help no matter how much you want to help. Maybe if you're a close enough friend, then you'll feel that you can cross personal boundaries a bit and force yourself a bit. But more often than not trying to force such discussions proves to be even more dangerous.

So what now, eh? Such is often the mystery. But we're all winging it through life in one way or another, I suppoose. We do our best.
all the world's a stage cultural victory health inner ramblings social networking